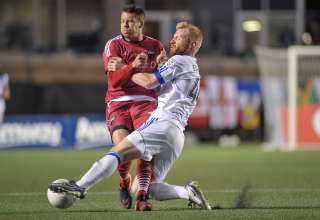 For FC Edmonton supporters, it had the making of a storybook plot twist.

Eddie Edward, an Ottawa-born-and-raised FCE fullback, found himself in the unlikeliest of places — in front of the opposition goal — with a chance to finish off a heroic comeback. He had a chance to put a stake through the heart of his hometown team. The ball came to Edward at the top of the Ottawa Fury’s penalty area, and he had keeper Marcel DeBellis at his mercy. Had Edward finished the chance, the Eddies would have come back all the way from a 3-0 deficit and shocked the Fury in the nation’s capital.

But, Edward didn’t get a chance to beat DeBellis. Timbo, the Ottawa centre back who scored the first goal of the first leg, dove in with a perfectly timed challenge and deflected the ball away. Timbo’s tackle would end up preserving the tie for the Fury; after winning the first leg last week in Edmonton by a 3-0 count, he “saved” a 2-0 loss in the second leg.

The Fury survive with a 3-2 aggregate victory in the Amway Canadian Championship quarterfinal, and will face the Vancouver Whitecaps in the semifinal stage.

For the Eddies, the Timbo tackle will become just another chapter in a novel entitled Agonizing Ways to Be Eliminated From the Voyageurs Cup. At least the Eddies didn’t get knocked out by a 97th-minute goals in the second leg of a tie, as they have in the past two years. But, scoring two first-half goals in Ottawa is yet another way this team has brought its fans so close to Cup joy — only to have it go bad in the end.

“In the second half, I thought we got a little bit predictable,” said Miller. “We were knocking a lot of long balls. But, the effort and attitude from the players was absolutely fantastic.”

Dustin Corea gave the Eddies hope midway through the first half. Ottawa’s Lance Rozeboom allowed Corea the space to shoot — and the FCE midfielder took the invitation. He scalded a swerving shot that found the corner of the Ottawa goal.

The marker lifted the Eddies, and they continued to push forward. At the 30-minute mark, striker Tomi Ameobi — the top scorer in ACC history — just missed the chance to cut the Ottawa aggregate lead to one; his goalmouth deflection of Adam Eckersley’s cross went just wide of the post.

But, right before the halftime whistle, the Eddies got a second goal. A free kick from Eckersley bounced through the penalty area and past Ottawa keeper Marcel DeBellis. We see this so many times; a free kick that isn’t deflected by one of the many players in the box goes straight in. Why? The keeper can’t necessarily play the ball, because he has to assume one of the attackers will make contact with the ball. So, when it stays on a straight line, it crosses him up.

That set the Eddies and Fury up for a nervy second half; and while the Eddies tried to push numbers forward, the Fury held up — barely. But, in the end, no one cares how you got to the finish line; getting past it is all that matters.

Even though the Eddies are in the thick of the NASL spring-season championship race, only two points out of first with the Carolina RailHawks heading to Clarke Field Sunday, Miller said there was never a thought of sending a B team to Ottawa.

“It was never a consideration. When we enter a tournament, we want to win it. And what we got was a very positive response and a positive result on the road. We came out to win this game, and we thought let’s see if we can get enough goals to turn over this tie.

“In truth, it was the game last Wednesday that did it. We gave up three very poor goals. Believe it or not, I can handle losing; if you’re beaten by a better team or a world-class goal, I can deal with that. But the three goals we gave up were absolutely criminal.”

When the Eddies play Carolina Sunday, it will be the sixth game in a span of less than three weeks. The Eddies won’t train till Saturday, to allow the bruised players the chance to heal and some tired legs to rest. In that stretch, the Eddies have looked bad in only one game — but it was that first-leg 3-0 loss to Ottawa. It’s a strange blip on what’s been a positive month’s worth of results for FCE.