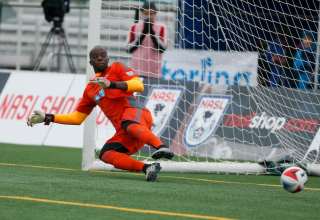 Clarke Field continues to be a house of horrors for RailHawks coach Colin Clarke and his Carolina team.

A second-half Daryl Fordyce penalty-kick goal gave the Eddies a 1-0 win over the RailHawks; the win gave the Eddies at least temporary possession of first place in the NASL standings, pending the outcome of Sunday evening’s game between the New York Cosmos and the Tampa Bay Rowdies. If the Cosmos don’t win, the Eddies keep first spot.

Since 2012, when FC Edmonton moved into Clarke Field, the RailHawks have not won there, and have been outscored 22-6.

Referee Francis LaTulippe pointed to the spot after Carolina defender Connor Tobin pushed Eddies captain Albert Watson to the ground on a set piece. As the ball was placed on the spot, RailHawks coach Colin Clarke bellowed to his keeper, Brian Sylvestre, to dive to his left.

Sylvestre dove way early, and to his right. Fordyce was able to go the other way with the shot.

“I couldn’t hear anything,” said Fordyce. “I just remember last year I took a penalty down in Carolina, and the way he was telling the goalie to go, that’s where I went.”

And because Sylvestre left so early, the guesswork was taken out of it.

“The goalie went early, and I sort of made my mind up where to go, both occasions,” said Fordyce.

For the few hundred fans that braved a downpour, wind gusts and a chilly 7 C afternoon, the goal brought some warmth to a miserable Edmonton day.

The RailHawks began with a very conservative 4-5-1 set-up, with a wall of five midfielders shielding a bank of four defenders. With FCE starting with a 4-1-4-1, the midfield was congested, and players struggled with the speed of the ball on the soaking wet pitch, as a series of passes took off and missed their marks.

Really, the first half produced only one chance of note; a shot from the Eddies’ Dustin Corea forced Sylvestre into a good reaction save.

But the game opened up in the second half, and the RailHawks had a couple of very good chances to take the lead. Alex Perez headed the ball just over the bar off a corner kick; then, Nazmi Albadawi’s effort went just wide after the ball took an awkward bounce and Watson had to get his arm quickly out of the way to avoid a penalty call against him.

The Eddies then got an even better chance; Corea skipped into the Carolina penalty area and, with no backswing, poked a left-footed shot towards the short side. Sylvestre got his fingertips to the ball and directed it off the post.

Later in the half, FCE’s Nik Ledgerwood had to leave the game due to injury and was replaced by Shamit Shome. The FCE teenager only returned to Edmonton at 11 p.m. the night before. He went to Costa Rica to join Canada’s U-20 national team, only to find out the camp and friendly had been cancelled because of the volcano eruptions just outside of San Jose. So, he turned around and came back to Edmonton, and then played the final 20 minutes of Sunday’s match.

After the Fordyce goal, Carolina had one last gasp; in time added on, Brian Shriver got a free kick opportunity from a yard outside the Eddies’ penalty area. It was blocked in the wall by striker Tomi Ameobi; then, Ameobi blocked the follow-up shot. The big striker’s commitment to the defensive cause is indicative of a change of culture at FC Edmonton, said coach Colin Miller.

“Good teams find ways to win,” said Miller. “You know, every game wasn’t a walk in the park for Leicester City this year, but they found a way to win. And last season, maybe in previous seasons, we would have found a way to throw that result away, by either drawing or getting beat. This group of players’ commitment to the cause tells me that we’ve probably turned a little bit of a corner at FC Edmonton, without getting carried away. We’ve done nothing yet, we’ll continue to put in this sort of effort and commitment and, touch wood, it’s enough to get us there at the end.”

“We’ve a lot more experience in the group and we’ve brought boys in like (veterans) Adam Eckersley and Nik Ledgerwood… there’s a lot of experience there,” said Fordyce. “We know not panic now, and to keep getting on with our jobs. Football’s a funny game, anything can happen, and you just got to keep getting on, doing the right things.”

The Eddies travel to last-place Miami FC next weekend. A team that many pundits had picked to finish last in the NASL spring season will keep going on its drive to win it.