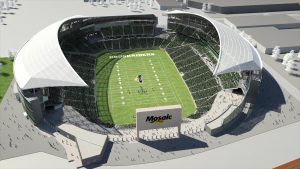 It hasn’t been home to a Canadian men’s or women’s national-team match. It wasn’t a host city for the Women’s World Cup or the U-20 World Cup. When it comes to soccer, Saskatchewan hasn’t been a destination for any Canadian national side.

But, could the completion of Regina’s 33,000-seat New Mosaic Stadium change all that?

The Regina Soccer Association has been working with other organizations in the Saskatchewan capital to see if they can attract a major soccer event to the New Mosaic Stadium. The stadium, which will be the home of the Saskatchewan Roughriders is scheduled to open in time for the 2017 Canadian Football League season. But the City wants New Mosaic to be more than a football stadium — so there is a push to bring high-profile soccer matches to the facility.

But Masch said the CSA was clear that, to host a sanctioned event, the turf at the still-under-construction New Mosaic Stadium has to be up to international standards.

“They have to be the kind of lines that can be scrubbed off the field, not stitched in,” he says.

Rod Schmidt, the manager of stadium development for the City of Regina, said the turf that will be laid in New Mosaic Stadium will have the sewn-in line markings. But he said the field will adhere to FIFA’s guidelines.

Sewn-in lines were a major issue for FC Edmonton at Clarke Field, before that turf was replaced with a FIFA-rated surface ahead of the Women’s World Cup. From 2011-13, FC Edmonton staged Amway Canadian Championship games at Commonwealth Stadium, because a CSA sanction requires that a soccer field only has soccer markings on it. In 2014, the games were played at Clarke with the permanent football lines covered in green paint.

The turf was then replaced.

Now that the turf on Clarke has removable football lines, it can now host sanctioned matches.

Schmidt said that the new field must be able to host multiple events. The new stadium is supposed to be a multipurpose venue. This fall, it is expected that the stadium will host a test event — possibly a concert — at 50 per cent capacity. In the spring of 2017, it is expected to host another test event, this time with 75 per cent of the stadium filled. Then, the contractor turns it over to the city.

Schmidt said that if Canada was to host another major soccer tournament — the Canadian Soccer Association has long ago announced its intention to bid for the 2026 World Cup — the turf could be replaced.

“If the World Cup came to Canada in 2026, we could look at putting in the new turf and removing the turf with the cut-in lines.”

He said that seams will be an issue on any artificial surface — with permanent lines or simple green. He said the biggest issues may come with the football hash marks and Mosaic logo that will be placed in the middle of the playing surface.