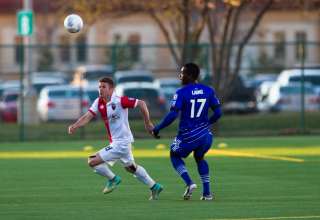 Up 3-1 after the first leg of their Amway Canadian Championship preliminary round tie against the Ottawa Fury, FC Edmonton’s players had a bit of a surprise prepared.

Instead of bunkering and trying to protect the three road goals they scored in the first leg, they came out onto the Clarke Stadium turf looking to break the backs of their opponents. The Eddies scored two goals in short order, then cruised to a 3-1 second-leg win, taking the series 6-2 on aggregate. The Eddies, who have not lost at Clarke since last July, will now face the Vancouver Whitecaps in the semifinals.

“We went out with the mentality that we wanted to win the game,” said FCE striker Tomi Ameobi, who scored the opening goal of the match. “We knew that, early in the match, they were going to throw everything at us.”

The Fury began the game as Ameobi said; defenders pushed up well past the halfway mark. On throw ins and free kicks, the Fury hurried as if it was the 90th minute, not early in the first half. But the Fury’s pressure also made the visitors susceptible to the Eddies’ counterattack. First, Ameobi had to simply steer the rebound into an open goal after Fury keeper Romuald Peiser stopped the initial shot from Cristian Raudales. Then, Sainey Nyassi smashed a shot into the top corner after he took a cross at the far side of the box. The switch of play came off the foot of Lance Laing, after a rampaging run down the left wing.

The Fury did get a goal back. Andrew Wiedeman became the first player in Amway Canadian Championship history to score goals for more than one team. He scored for Toronto FC in the past, and then scored for the Fury after he found a gap between Eddies’ defenders Kareem Moses and Mallan Roberts.

Then, referee Drew Fischer had to make a decision. Late in the first half, Wiedeman took a nice through ball, and had a step on the last Eddies man back, defender Albert Watson. Watson put a foot in, and Wiedeman went down. Fischer ruled no foul. Had he pointed to the penalty spot, he would have had to send Watson off for spoiling a clear scoring chance. The Fury players leaped off the bench in outrage. After looking at replays, the margin was razor thin; the ball looked to have moved slightly, suggesting Watson may have made contact with it. But, an argument could have also been made that the ball moved because Watson had felled Wiedeman. If the Fury get a penalty, it has the chance to make it 2-2 at half, with the Eddies at 10 men. But Fischer didn’t see it that way.

Martin Nash, the acting coach of the Fury as Marc Dos Santos sat in the press box to serve a one-game suspension, said that he thought the Watson tackle was indeed a foul. But he also suggested that it’s hard to focus on the calls when the Fury players defended as poor as they did over two legs.

And the Eddies had more chances before halftime, but Peiser made a remarkable double save, first thwarting Ritchie Jones then diving to block the second-chance shot from Daryl Fordyce.
Laing was stretchered off just before the half and was subbed off. But FCE coach Colin Miller said that the Jamaican winger had got a knock and should recover ahead of Sunday’s NASL showdown with Minnesota United. He said the decision to take Laing off was “precautionary.”

The second half was played at a more controlled pace; but substitute Michael Nonni drew a penalty and Fordyce buried the spot kick. That gave Fordyce four career Amway Canadian Championship goals, tying him for the tops all time in tournament history — he now shares the top-scorer mark with Camilo and Dwayne De Rosario.

Now, the Eddies hit an early season patch that could define their season. They play Minnesota United on Sunday, then host the Whitecaps, visit the New York Cosmos two weekends from now before heading out to Vancouver for the second leg of their ACC semifinal.

“For me, the biggest game is against Minnesota United,” said Miller. “That’s what we are focused on. Then, after that, we look forward to the Whitecaps. It’s just a fantastic organization from top to bottom. I enjoyed my time at the club.”

Miller was an assistant with the Whitecaps when they came into MLS; last November, to maintain his UEFA licensing, he did a club study of the ‘Caps.

The Eddies have now scored three times in each of their last three matches. And Ameobi said the club still has a lot to prove.

“We want to show that we are a match for any team we play in NASL, and that we’re a match for the MLS teams we’ll play in the Cup.”

Late in the game, FCE 18-year-old Hanson Boakai made his first appearance of the season. One of the star of last year’s Canadian Championship, Boakai had not been selected for Eddies games to start the 2015 season.