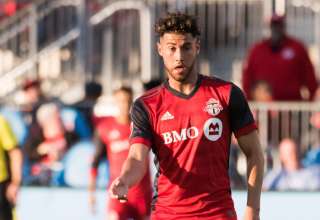 TFC are two thirds of the way through the Mexican gauntlet.

And, thanks to an early goal from Jonathan Osorio and a dogged defensive effort, the Reds not only were able to protect a 3-1 lead in Tuesday’s second leg of the CONCACAF Champions League semifinal, they drew the game 1-1, to boot. At Azteca Stadium, a place where Canadian dreams don’t just go to die; we’re wise enough to know that Azteca’s a place where the visitors should know never to get their hopes up. The altitude, the smog. The noise that doesn’t have any lulls.

Now, Chivas awaits in the final.

“We’re not done. We’re not happy at being where we are right now, we still have a lot of work to do,” said TFC coach Greg Vanney after the match.

Of course, as TFC progresses, there are worry about the shrinking squad. Jozy Altidore had to leave Tuesday’s game in the sixth minute with what looked like an ankle issue. And Gregory Van Der Wiel left at halftime.

This was a TFC team that was already missing three regulars.

But, ironically, Altidore leaving the game, forcing coach Greg Vanney to bring in Edmonton’s own Tosaint Ricketts, helped lead to TFC’s goal. If there’s one area Ricketts has Altidore beat, it’s raw footspeed. And the threat of his speed forced CA defender William da Silva into a panicked challenge that saw the ball go across the box to Osorio, the pride of Brampton, to slot into an empty goal.

Two Canadians involved in maybe one of the biggest goals ever scored by a Canadian club, in one of the world’s true soccer cathedrals. Pinch me.

Even though Club America changed up its backline personnel, the same problem it had in the first leg came back to bite it at Azteca. That is, the centre backs’ needless desire to make challenges way up the pitch and yank themselves out of position.

When Sebastian Giovinco got the ball in midfield, both of Club America’s centre backs charged at him, for no apparent good reason. The fullbacks, though, didn’t push up, so Ricketts had acres of space to run in behind the centre backs, which forced da Silva to have to come over to help. And, by then, the hosts had nothing left in terms of organization, and Osorio was able to streak in, unmarked, to finish the play.

Keeper Alex Bono, who has named TFC’s man of the match, came up big later in the first half, getting a palm to a diving header from Victor Aguilera. And, while that save will be repeated over and over on highlight shows, Bono wasn’t asked to make too many miraculous stops. Yes, Club America pressed and pressed and pressed, had plenty of the ball in the final third, but didn’t do enough to translate that into meaningful chances on goal. As well, it needs to be said that, outside of a stoppage-time consolation penalty kick from Andres Uribe, Club America’s work on set pieces was, well, brutal. Wayward free kicks, corners that consistently couldn’t clear the first defender.

Heck, it got so bad that, late in the second half, Club America keeper Agustin Marchesin was tasked to take a free kick. He hammered it off the wall.

Toronto FC’s trip to the final also continues the pattern that Canadian MLS teams do far better in the CONCACAF Champions League than their American counterparts do — even though the U.S. gets four slots in the CCL, while the Canadians get just one.