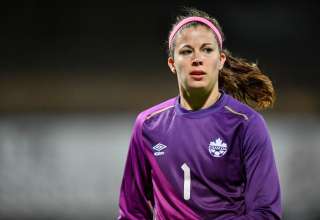 France’s win at home Monday night over the Canadian women’s national team will go as one of the most comprehensive 1-0 wins we’ve ever seen.

Let’s be honest; 1-0 doesn’t come close to being an accurate reflection of France’s dominance over the visiting Canadians in front of a boisterous crowd in Rennes.

The only reason that this friendly didn’t have more of a one-sided tilted-field scoreline was because of France’s insistence to try and walk the ball into net. And, when the French did settle down to shoot, the wayward attempts made you see exactly why the team in blue so often chose to try and walk the ball into the net. In a lot of ways, save for the different result, France’s attack was very similar to that famous 2012 Olympic bronze medal match, when it did everything but put a ball across Canada’s goal line.

France got its goal early on; the blue shirts came forward in numbers, daring the Canadian defenders to try and work the ball through them or punt the ball to safety. Canada’s back line did neither, and a comedy errors led to a penalty kick. After the French got the ball deep into the Canadian half, fullback Ashley Lawrence made the decision to try and hold the ball and look to pass the ball out of trouble. She lost it, which led to another period of French pressure, and, during the ensuing scramble, a bouncing ball found the arm of Canadian midfielder Diana Matheson.

But Le Sommer should have made it 2-0 shortly after that; a quick French move down the right side led to a cushioned header back to the middle of the Canadian penalty area. Le Sommer was in perfect position to finish the clever move, but headed over the bar

In the second half,  Labbe was called in to make a good leaping save to tip a shot from  Gaetane Thiney over the bar.

Labbe would have an even more impressive save to make later in the game, as France was awarded its second penalty of the night. Desiree Scott was ruled to have brought down France’s Amel Majri in the area, but it looked more like the French player slipped on her own. Amandine Henry stepped to the spot, but Labbe guessed correctly, diving to her right to parry away the shot.

If France wants to send the message that it will be favourites to win the Women’s World Cup at home in 2019, well, the team is doing a fine job. And, for Canadian coach Kenneth Heiner-Moller, he now has to look at ways that the Canadians can deal with the French press. Canada struggled in areas (fullback) where we don’t normally see it have that many difficulties. But the French came and came and came at the Canadians in sheer numbers. And, for a program that prides itself on its ability to play attractive football, Canada couldn’t find a way to pass itself out of trouble.