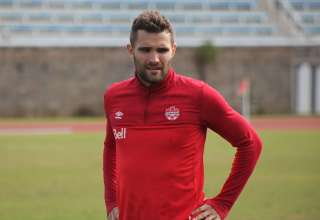 Adam Straith walked onto the indoor turf field at Commonwealth Fieldhouse about halfway through FC Edmonton’s training session, alongside the team’s other new signing, striker Dean Shiels. Both had just completed their medicals, got to the facility and changed into blue FC Edmonton training kits.

Immediately, Netan Sansara — the fullback signed by the Eddies earlier this year — came over to embrace Straith, the Canadian international. Both had played together last year at Norwegian side, Fredrikstad. Now, they’re teammates again.

Straith has signed with the Eddies for the spring NASL season. The defender/midfielder can play a variety of roles for the Eddies. He’s made 41 appearances for Canada; in the team’s most recent friendly, a 4-2 win over Bermuda, Straith had to go in goal when cards and injuries claimed all of the team’s regular keepers. He ended up getting credit for the win in that game.

“It’s a bit of everything thrown in with Adam,” said Miller.  “I’ve worked with Adam with the national team when I was the interim coach. Excellent professional, and has the ability to play as a centre back or as a holding central midfield player. So, we can kill two birds with one stone.”

With centre back Karsten Smith out for what’s expected to be six weeks with a calf injury, the team needs some cover for starting central defenders Albert Watson and Pape Diakite. Miller said Friday that young Canadian centre back Marko Aleksic, who he could one day envision being the captain of FCE one day, could get loaned out this season — but that decision would be made after the team’s preseason trip to Manchester.

The deal to bring Straith to Edmonton came in short order.

“I’d been at a couple of clubs in the last couple of weeks, training,” said Straith. “For a number of different reasons, they didn’t work out for the time being. And this is something that came up fairly quickly, actually a couple of days ago. I had a discussion with Colin about what he sees from me and what he expects out of me, and it fit the expectations I have for myself at this time.”

With Canadians Nik Ledgerwood, Ben Fisk, Tyson Farago and Straith having senior men’s team experience, and Mauro Eustaquio in the mix for the national team, the Eddies could have headaches when Canada plays Scotland on March 22, and later this summer during the Gold Cup. With the NASL not breaking for international windows, having a lot of national-team-level players at one club can be both a blessing and a curse.