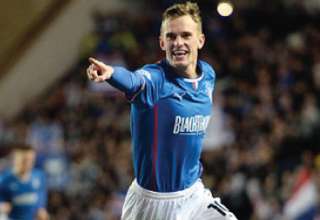 In the lead-up to the signing and after the deal was finalized, FC Edmonton coach Colin Miller has repeatedly referred to Northern Irish striker Dean Shields as a “difference-maker.”

So, did Shiels feel the weight of expectation on his shoulders when he took the field with his new Eddies teammates for the first time Monday?

“Not really,” Shiels said after training at Commonwealth Fieldhouse. “I played with Rangers in front of 50,000 — that’s pressure. But I think, no matter who you are or where you are, when you play you always put pressure on yourself. And I’ve always done that and I’ve always expected high standards of myself. That’s something I want to bring to the team and I want to become a key part of this team.

“I was excited at the chance to play in this league and a new experience for myself.”

Shiels came up through Arsenal’s youth system, then played in Scotland for Hibs. He returned to England to play at Doncaster Rovers, where current Eddies’ forward Tomi Ameobi was a teammate. He then went to play for Kilmarnock, where he was coached by his father, Kenny Shiels.

“My dad’s been the sole influence in my career, especially at a young age,” Shiels said Monday. “He’s advised me throughout my career. He’s probably the reason I’ve become a professional, all the hours I’ve put in at the training ground when I was a kid. And, throughout my career, he’s always instilled good habits and, obviously, he’s been a major influence on where I am.”

He said the years at Arsenal were “vital” to his development.

“It’s a great place to get an education, to prepare you into being a professional footballer. Obviously, I played for brilliant players and great coaches and that can only benefit a player. Especially for a young player, it’s one of the best clubs in the world to go and learn your trade and it put me in good stead throughout my career.”

Shiels played for Rangers for 2012-16 and then went to Ireland to play for Dundalk.

“I believe he can be a difference-maker in our league,” Miller said. “Players that have come over from Ireland or the U.K. traditionally have done quite well in the NASL. So, I’m very excited to see how Dean does. His background is fantastic.”

Shiels has made more than a dozen appearances for Northern Ireland, and has played against Albert Watson, the Eddies’ Northern Irish veteran, in the past. The two communicated before Shiels arrived in Canada.

“I spoke to Albert a couple of times. Obviously, knowing someone helps when you come so far away, to settle in. He picked me up from the airport and showed me around a bit. It’s nice to have someone here who knows the area before you arrive. He had good words to say about the team and about the place.”

Watson told Miller that Shiels’s movement had given the defender trouble when the two faced each other in the past.

Shiels had his right eye removed early on in his career, but it’s not a worry for Miller. Remember that NHL defenceman Bryan Berard came back and played for the Toronto Maple Leafs after he was blinded in one eye by an errant stick.