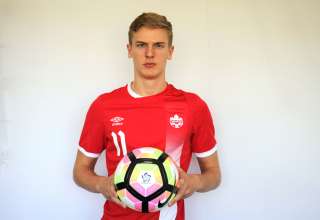 As yet another Canadian men’s Under-20 cycle comes to a premature end, there is the little consolation that it ends on a high note.

Canada scored a goal in each half and concluded its brief participation at the 2017 CONCACAF U-20 Championship with a 2-0 win over Antigua and Barbuda.

“We probably could have had five or six goals for sure it doesn’t always happen that way,” said Kris Twardek, who scored in the first half to go along with Shaan Hundal’s late insurance goal.

“Any time you leave a tournament you want to leave on a high not and I think we’ve done that. For a lot of us, there’s big disappointment and from the players and staff we had higher expectations. It’s definitely satisfying to win the last game but I think we knew we had more in us.”

In what was the most overpowering opening 45 minutes by any Canadian men’s program in recent memory, Canada was up a goal but it could have been a half-dozen as chance after chance was either saved, missed the target or hit the frame of the goal.

Twardek scored in the 23rd minute when he converted Hundal header that came off the post.

Coming into the tournament, the assessment was that Canada would have a hard time getting out of the group. Without the likes of Shamit Shome, David Choinière and Ballou Tabla, Canada’s hopes relied on the first game against Honduras. Canada dropped that game 1-0 on a long-range shot after what was a decent enough first half, but where the Canadians, once again, could not convert their scoring opportunities.

With the cycle over, the assessments will begin. Head coach Rob Gale knows his own status will be among the evaluations but feels there is talent in the Canadian system.

“We know the bottom line and the headlines will be that we didn’t qualify for the World Cup. The Honduras game killed us, no question,” said Gale. “But we’re not going to throw out all that hard work because there is talent. I think it will progress and you’ll see it soon here with the program and more opportunities to get these guys international experiences.”

One standout in Thursday’s game was Diego Gutierrez, who was just three years old when his family moved to Canada from Chile.

Gutierrez was a late addition to the Canadian stable but if he sticks in the program, he is a promising inclusion with an oftentimes silky touch on the ball, able to slot the tricky pass and is very much a creative midfielder that could help the Canadian program.

Twardek, another recent addition to the program seems to have no second thoughts about his decision to switch his international affiliation from the Czech Republic to Canada.

“I can say that the change to Canada was the best decision I’ve ever made,” said Twardek, on loan with Braintree Town in the English National League from Millwall. “The staff here, the players—I come to these camps and it’s the most I’m enjoying my football. I can say that there’s definitely more to come from this group.”

Canada’s last hope of qualifying for a youth World Cup in this cycle rests with Paul Stalteri’s U-17s. Their World Cup qualifier takes place in Panama in April and May.

But for the U-20s, the drought now extends beyond a decade and perhaps a little more dubious and is something that may need to take some further examination, Canada has failed to qualify for a U-20 World Cup in the MLS-in-Canada era.

When CSA president Victor Montagliani leaves the Canadian program in the spring, he’ll also leave without a U-20 World Cup berth during his time in charge.