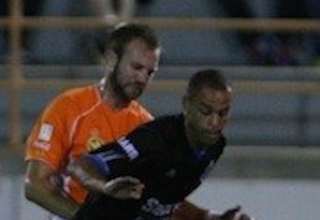 FC Edmonton went into its Saturday road date with the Puerto Rico Islanders without a goal in its last four games, and without the team’s two top players so far this season.

Midfielder Shaun Saiko had to serve a one-game suspension after he accumulated his fifth yellow card in Wednesday’s loss in San Antonio, and goalkeeper Lance Parker had to fly back to Alberta after the loss in Texas, as he is nursing a groin problem.

But John Smits stole the show, with a ridiculous display of goaltending prowess. Kyle Porter broke the Eddies’ scoreless streak, FC Edmonton and the Islanders traded punches but had to settle for a 1-1 draw in the Caribbean.

From the way the teams traded scoring chances, you wouldn’t believe that 0-0 draws were the results of the first two encounters this season between the clubs. Really, if this game would have finished 5-5, it would have been fair based on the quality scoring chances each team was able to carve out.

“It was a totally open game,” said Smits. “It was a mental-adversity game. Both teams were very tired physically, we were on our third game in a week. And, while in the last few games we have focused on playing defensively, we found it in ourselves to create some more chances, to play a riskier style. And we knew Puerto Rico had played a lot recently, too. So, as much as we were tired, we knew that they were tired and they could be beaten.”

But it was also a tribute to Smits, who once again played well when called upon — as he did earlier this season — and Islanders’ keeper Richard Martin. Remember that Smits, a University of Toronto product, was everybody’s pick to be No. 4 on the goalkeeping depth chart this season; but he is showing all of Canada that he might be our great, unsung goalkeeping prospect.

“It really was a battle of the goalkeepers,” said Smits. “Defnitely, their guy made a lot of saves.”

Smits made his first highlight-reel save midway through the first half. Islanders’ forward Gregory Richardson was able to cut inside of FCE defender Jonathan-Joseph Augustin, and found himself in alone on goal. But Smits bravely charged off his line and threw himself at Richardson’s feet, blocking the shot. Smits said he had to react fast because he saw Islanders’ captain Noah Delgado lurking unmarked in the penalty area.

“I saw Delgado on the other side of the six so I knew I couldn’t give him (Richardson) time to either take the shot or make the pass.”

But, four minutes after the save, Smits was caught by surprise by an effort from the Islanders’ most prolific scorer, Jonathan Fana. The Dominican Republic national-teamer was allowed way too much space and was able to cut in from the left across the top of the box, and he launched a shot that looked to catch the keeper flat-footed. It went in by the near post. For the first time in three matches between the teams, a goal was scored.

But FCE responded with some offensive bursts of its own, not looking like a team that hasn’t scored a goal in its last four matches. Forward Yashir Pinto got his first of many good looks right after Fana scored. Matt Lam chipped a perfect free kick into the box, Pinto corralled it and launched a shot that looked to be the equalizing goal, but Islanders’ keeper Martin leapt and palmed the ball over the bar. Porter also had a decent chance on the counterattack right before the stroke of halftime, using his speed to get into a danger area. But, without any support, Porter’s only option was to shoot while being harried by defenders, and his effort was placed directly at Martin.

The second half saw Smits pressed into action two minutes after the restart. He dove and robbed Islander Jarad van Schaik from point blank range after a beautiful run and low cross from Fana,

And, soon after Smits made that save, FC Edmonton finally broke its scoreless streak. Porter played in a cross from the left side, but it curled and snuck inside the post. With Pinto charging at the cross, Martin was forced to play the runner, not the ball. And when Pinto didn’t get a touch and the ball game through clean, Martin was in the middle of the goal and couldn’t scramble to the post to get to the ball.

“Yashir and me had talked about that, if one of us got the ball in that position, the other would make a run for the goal,” said Porter. “And that’s exactly what happened. Yashir made the run and the keeper saw that. Yashir’s run created the goal.

“We were pressing for a goal the entire game, Matt and Yashir and myself were poaching, looking to get that goal. And while it might not have been our best scoring chance, we deserved that goal. We were working hard for it. All season long, we have struggled to get back into games after we go down, and this time we got the goal.”

But the chances kept coming. Hector Ramos stripped FCE central defender Paul Hamilton, then had a one-v-one against Smits. But Smits, again, came bravely off his line and got his hand to the ball. Then off the ensuing corner, a diving Smits touched a headed effort from Delgado off the post.

After Smits made another sprawling save off Delgado, FC Edmonton striker Michael Cox drove a shot towards the Islanders goal that Martin dove to get to, directing the ball off the woodwork.

Off a corner, Pinto had a golden chance to win it for the Eddies. The ball fell to him just three feet from the Islanders goal line, but instead of placing the shot, he chose to blast the ball, and the effort missed the goal — by quite a bit.

Then, the Islanders came down the field and substitute Nick Addlery pushed his chance off the woodwork.

It was a hectic, franctic game, a wonderful advertisement for the NASL. And, certainly, there are more than a few Islanders who won’t be able to shake the memories of being robbed by Smits.

“I’m not really concerned about putting myself on the radar. I am concerned about getting results and enjoying my soccer and I am just trying to improve my game as much as I can. After every game, I look at what I did out there. And while I had a good game in terms of shot stopping, I looked at my distribution, is there something I could have done better to help us win the game?”

With the draw, FCE remains seven points back of the Fort Lauderdale Strikers for the final playoff spot in NASL.