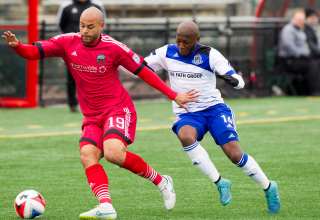 FC Edmonton have a bye this weekend; but, beginning next Wednesday, the Eddies begin the most hellish part of their schedule.

“The squad will be tested for sure, that’s why we’ve got the squad that we’ve got,” Miller after Thursday’s training session. “And that’s why we topped up the fitness this morning, just to keep everyone working.”

The team will play an intrasquad game Saturday at Clarke Field.

And the Eddies may lose some players to international duty during this stretch. Midfielder Shamit Shome could be on the radar for the Canadian U-20 side. As well, fullback Adam Eckersley and midfielder Ritchie Jones are still coming back from long-term injury issues. Striker Tomi Ameobi missed last weekend’s win over Ottawa due to a training-ground injury; FCE coach Colin Miller is “optimistic” that Ameobi can be with the team for next week’s two-game trip which takes the Eddies to Jacksonville and then Indianapolis. Fullback Allan Zebie is coming back from injury, as is central defender Marko Aleksic.

And winger Sainey Nyassi, whose corner set up Albert Watson’s winning goal last weekend against Ottawa, will definitely be out for the Jacksonville match. While the Eddies are in Florida, he has to go to Rhode Island to meet with U.S. immigration officials about his green card application.

“Unfortunately, we play Wednesday night and Sainey’s appointment is at eight o’clock in the morning,” said Miller. “So, unless there’s a bus or a train — it’d have to be a very fast bus — he won’t be available for the Jacksonville game.”

But Miller said the players will get the benefit of more games and fewer training sessions over the next few weeks.

“As a player, I wanted to play. I didn’t want to train, I wanted to play in the game. From that point of view, it’s positive. It’s nothing new to us, with the Amways and the midweek games. I think it’s an exciting time for the team. We play well away from home, touch wood, so far. We’ve been hard to break down on the road. It’s a spell of games we really look forward to, here.”

The Eddies are 0-1-1 on the road so far this season, but missed a last-minute penalty-kick in the 1-0 loss to the Tampa Bay Rowdies a couple of weeks back — so the team feels like it should have at least two draws to show for its two road efforts so far this season.