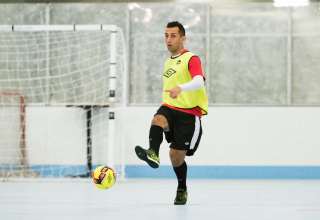 The American national team has a roster filled with professional players — only three members of its current team is listed as unattached.

The Canadian national team has only three professionals on its roster — the rest of the team is made up of amateurs from Ontario and Quebec.

So when the two teams meet in Costa Rica for a two-game play-in series at the CONCACAF Futsal Championships, it will be David vs. Goliath. The Canadian national futsal squad plays the Americans May 4 and 6 in Costa Rica; the winner of the series gets placed in Group B for the CONCACAF championships; the losing team gets plane tickets home.

The CONCACAF championships act as the qualifier for the Futsal World Cup.

But, the three pros who are making the trip are top players in the MASL. Assadpour was named to the MASL’s first-team all-star team in 2015/16; Bennett was on the second team. Moojen scored 10 goals in 12 games for the St. Louis Ambush this past season.

(Both Moojen and Bennett have been profiled in past issues of Plastic Pitch).

Canadian coach Kyt Selaidopoulos and the national squad leave Thursday for Costa Rica; they’ll spend six days prepping for the first of the two games against the United States. Included in that schedule is a friendly against Honduras. The Americans will prep for the games with a camp in Argentina and a friendlies against Argentina’s senior and U-20 national futsal squads.

Selaidopoulos said that the three indoor-soccer vets will play big roles on the Canadian side.

“They will bring another side to the game, they have the experience. The have joined the Quebec and Ontario players we have, and they understand that we are on a mission. Bringing in the pros has made the team even better; things are more positive.”

Now, it needs to be said that the American players — and the three Canadian pros — play the majority of their soccer old-school arena style. They are on the turf and the boards with a ball that’s the same size as one you’d find in the outdoor game. It’s an adjustment to go to futsal, with the smaller ball and, well, no boards.

“I don’t think it’s something that really affects these guys,” he said. “They’re playing on a straight surface, and I don’t think there are any issues.”

For months, Selaidopoulos looked at the futsal leagues in Ontario and Quebec, looking for players. But this is where the schism between futsal and arena soccer become apparent. In Quebec and Ontario, leagues have risen that develop futsal players. In the rest of Canada, arena soccer is still king.

Selaidopoulos long-listed 30 players, and picked the roster from that, adding in the three MASL pros. Included in the team is keeper Vincent Cournoyer, who led Beauport to a senior men’s outdoor amateur title in 2012, which it won in a penalty shootout.

But, Selaidopoulos is hopeful that futsal evangelists will succeed in other parts of the country.

“Since I took over, there has been a lot of interest from the other provinces,” he said. “I’ve seen interest from Alberta, New Brunswick, Vancouver. They are looking to build towards futsal. Now that the CSA is invested into this, others will pick it up.”