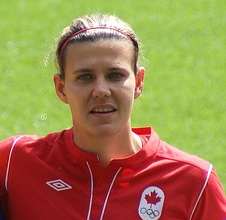 Christine Sinclair will accept the four-match suspension handed down by FIFA to the women’s program star player. But, Sinclair was still defiant when she spoke to the media Monday.

It was suffragist Nellie McClung who uttered one of the most famous lines in Canadian history: “Never retract, never explain, never apologize — get the thing done and let them howl.”
That statement could apply to Sinclair.

“I don’t regret what I said,” said Sinclair.

“It was a very intense time, I was very emotional, I wouldn’t want to change it.”

The Canadian Soccer Association will pay the 3,000-Swiss franc fine, even though it is still waiting for a full explanation from FIFA on why it decided to issue the penalty. Sinclair will serve the four-game ban through a January tournament Canada is scheduled to play in China. If Canada is eliminated before it plays four games in China, the suspension would spill over into February’s Cyprus Cup.

Sinclair, who led the Olympic tourney with seven goals, was highly critical of Norwegian referee Christina Pedersen after Canada lost 4-3 to the Americans in the semifinal. With a hat trick, it was Sinclair’s finest game in the Canadian jersey — and that’s saying something for the best player our country has ever produced. But, with Canada leading 3-2, Pedersen decided to penalize keeper Erin McLeod for delay of game, a call that’s more rare than traveling in the NBA. The subsequent free kick ricocheted off the arm off Canadian defender Marie-Eve Nault, and the U.S. tied the game on the penalty.

While Sinclair publicly acknowledged that she didn’t believe Pedersen was fixing the match, she made it clear she wasn’t sorry for what she said. Sinclair will accept the suspension, but she isn’t going to say she’s sorry. And that is a big thing. Soon, referee assignments will be made for both the U-20 Women’s World Cup and the Women’s World Cup. With both tournaments on Canadian soil, Pedersen will be on hostile ground if she is picked. And, without Sinclair saying the “sorry” word, Canadian fans won’t think about changing their opinion of her.

“I still can’t watch the game against the U.S.,” Sinclair said. “It’s still a touchy subject. It was an emotional time, and it got the best of me.”

But there won’t be any protests of the penalty, either.

“It is my intention to accept (the suspension). I as a player want to be able to move on.”

CSA President Victor Montagliani said that “as a member of the FIFA family” Canada would accept FIFA’s decision. But he added “we stand behind our player 100 per cent.”