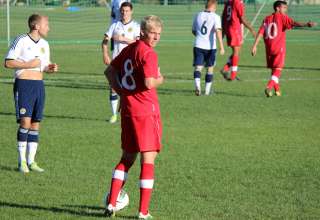 After a bright start with a 2-1 win over the United States, Canada’s U-20 squad has now lost two in a row at the Marbella Cup in Spain.

Canada slumped to a 2-0 defeat to Scotland on Monday, after losing 1-0 to Azerbaijan on Friday.

Scotland opened the scoring just five minutes into the match, as forward Stuart Armstrong’s effort found the back of the net. Armstrong, a Dundee United product, had his greatest moment for the Scottish youth program when, as an U-19, he scored twice against Montenegro.

Celtic striker Tony Watt, who is the most-talked about youth player in their program, got the second goal. Watt is already being heralded as the next great Scottish striker — and there are plenty of calls for him to be promoted to the senior national team on a full-time basis, even though he’s just 18.

What has to be disappointing for Canadian coach Nick Dasovic and his U-20 charges is that after the first match, when Samuel Piette scored a wonder goal and Caleb Clarke got the winner against the Americans, the Canadians were not able to create a goal in the two subsequent matches.