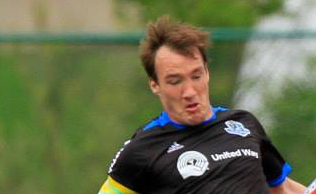 You could hardly blame FC Edmonton captain if he had some mixed emotions about seeing the Atlanta Silverbacks come to town.

The last time the Eddies faced the Silverbacks, Watson had his front teeth knocked out by a late challenge from Atlanta midfielder Danny Barrera. The Silverbacks’ midfielder drove his shoulder through Watson’s head after the ball was long gone — and that Barrera didn’t see red for that challenge was one of the more mystifying non-calls we’ve seen in an NASL match.

The Eddies are preparing for the Silverbacks to pay a visit to Clarke Stadium on Sunday. But, when the topic of the lost teeth and the Barrera challenge was brought up with Watson after FCE’s training session on Thursday, Watson first wanted to thank all the medical and team staff in Atlanta, who made sure he got immediate dental treatment after the game.

“It would be nice to see them again, to say thanks for what they did for me, but I also don’t want them to leave with any points.”

And, after saying his thanks to the Atlanta staff, Watson spoke about Barrera’s challenge.

“I don’t think too much about it. Obviously, it was a bad challenge. And he hasn’t apologized to me. Maybe I’ll get an apology on Sunday. Maybe, if I do, then I might lay off of him a bit. If not, we’ll see what happens. Maybe I’ll get Nursie (hard-edged midfielder Chris Nurse) to sort things out.”

There was a wry smile on Watson’s face when he made that statement, so maybe a literal interpretation is unfair. But, Sunday’s match promises to be intense. When the teams last met, Nurse was sent off in the second half but, despite being down a man, the Eddies rallied to a 1-1 draw on the road. And, when the teams met in Edmonton in the spring season, keeper Joe Nasco got confused by the football lines on the Clarke Stadium turf and handled the ball outside the area — and was sent off. The Eddies handed the Silverbacks a 3-0 loss.

“I think they’ll be thinking about revenge,” said Watson. “We gave them a 3-0 thumping last time they were here. They don’t have anything to play for, so they need to look for something to motivate them. And I think their coach, he’ll use that.”

Atlanta is also coming into Edmonton Thursday, giving the team Friday and Saturday to acclimate. Compare that to Eddies, which got into their North Carolina hotel at 3 a.m. the day of their last road match, a loss to the RailHawks.

And while Edmonton has had success against Atlanta this season, Watson said it’s imperative that the Eddies don’t leave any gaps. Atlanta moves the ball quickly and can be a dangerous team to track. They try and pull defenders out of position with ball movement.

“We’ve got to play high (line), and we’ve got to play better than we did against San Antonio (last Sunday’s 1-0 win),” said Watson. “There were times against San Antonio that we were a wee bit lucky. Yes. We held Denissen (NASL leading scorer Hans Denissen) to one or two shots, but we know that we can play a lot better than we did. We created a lot of chances and got just the one goal. We have to take the chances that we make.”

There may be some help coming to the offence: Both striker Daryl Fordyce and attacking midfielder Gagan Dosanjh were back training with the Eddies. Midfielder defender Wes Knight is still a couple of weeks away. His progress report on the recovery from his broken foot was delayed by a couple of weeks because his surgeon was out of town. Now, he’s been told to not go back to full training for a couple of more weeks.