The signing of Clint Dempsey has accelerated the erosion of trust that North American soccer supporters have in MLS.

At least that’s what we can take from the results of a poll of The 11’s readership. We felt, as a Canadian site that mainly concerns itself with the state of the game north of the border, that it would be premature to pass judgment on the decision to bring Dempsey, an American soccer icon, back to the league. So, after the Dempsey deal was done, we took the pulse of our readers.

And the reaction to the Dempsey deal? Overwhelmingly negative. Dempsey was brought back to the league by MLS two weeks ago. To get Dempsey to Seattle, which wasn’t at the top of the allocation order, the league invoked a rule that isn’t printed. It said that Designated Players could skip the allocation process. The league was reported (CLICK HERE) to have spent the $9 million needed to satisfy Tottenham’s transfer-fee requirements.

According to the poll, fans feel that the Dempsey deal is an example of a league that doesn’t allow a level playing field for its member teams.

What should be concerning for MLS is that only 16 per cent of the respondents felt that the Dempsey deal was something that was palatable. Ten per cent chose the “MLS has to do whatever it can to attract marquee players option” while just six per cent thought “the deal was fair to all parties.”

What MLS needs to be concerned about is the growing perception that the league’s teams are part of a single entity but, to bastardize George Orwell, “all teams are equal, but some teams are more equal than others.”

Thirty-six per cent responded that they “don’t feel that MLS is fair to all teams,” and a significant 21 per cent checked off the “MLS=WWE option.” That means, in The 11’s readership community, one in five see Major League Soccer as a league that is rigged from headquarters down. The numbers of naysayers far outweigh the positives.

When Dempsey went to Seattle, the league cited an unpublished rule which states that players destined for Designated Player status don’t have to go to the team at the top of the allocation order. When the Dempsey deal was made, officials from the league’s teams — including Toronto FC president and general manager Kevin Payne — were quick to point out that, while the rules about how Designated Players enter the league weren’t clear to the fans, they were transparent to the teams.

That argument would be fine, if MLS only existed to please the front offices of the 19 teams. But it exists for the supporters and the fans. And those are the people to whom the league needs to be accountable. There’s a real disconnect here. The league has to understand that, until it’s machinations are clear to fans and the media, it can’t in any way claim transparency.

And fans were overwhelming in their support of MLS scrapping all of its unique mechanisms. Instead of making new rules to govern allocation orders and allocation money — fans were clear. They want a simple salary cap without allocations. They want teams, like in the other major North American leagues, to announce the salaries and cap hits when the players are signed. They don’t want players to go to teams based on the randomness of the allocation order; in fact, they think that it’s time for single entity to die.

Seventy-four per cent, almost three quarters of respondents, told us it’s time for MLS to scrap the allocation order. And just a hair less than 80 per cent responded that it’s time for MLS to scrap the awarding of allocation money, the secret kitties of cash that are out there for general managers to spend, and make it impossible for fans to understand how close or far their teams are to their salary-cap limits.

More than three quarters said they want salaries and terms announced when players are signed, rather than having to wait for the MLS Players’ Union to make updates to its salary charts.

And, with a strong salary cap in place, the wide majority of fans don’t understand why single-entity is an issue. Seventy-eight per cent want teams to sign their own players, make their own deals and only worry about staying under the cap.

These numbers show us MLS is at a crossroads. Single entity has gone from something that was needed in the 1990s to help nursemaid a fledgling league to something which now is helping the perception, however fair or unfair, that it is an untrustworthy big league. There’s a real disconnect between MLS and its fans when it comes to trust at the moment. The tools that the league once used to keep all the teams competitive is now seen as a hammer of imbalance. And remember, this discussion isn’t about what’s fair or unfair; it’s about what’s perceived as being fair or unfair. And, in the public eye, perception is as important as reality.

A few points about the poll: Through analytics, we noted that more than 80 per cent of the respondents were Canadian. That’s not a surprise, as this is a Canadian site that follows the game north of the border. So, the results will be skewed towards Impact, Toronto FC and Whitecaps supporters. Think of it as a focus group of dedicated readers/soccer supporters. But, it also needs to be noted that, despite the sample size, the poll results were consistent from day one to seven; the percentages were established early, then barely moved. And that’s a sign that we avoided any spikes or runs of votes that would have spoiled the poll. 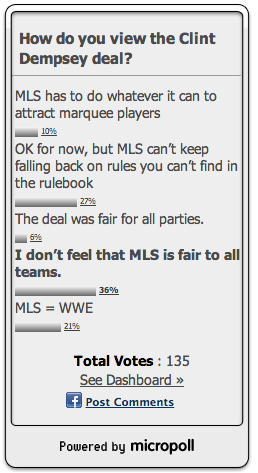 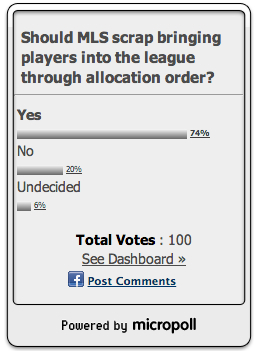 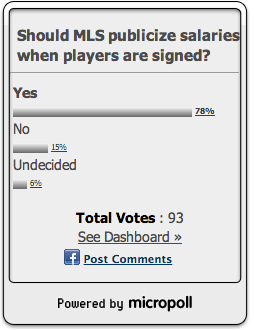 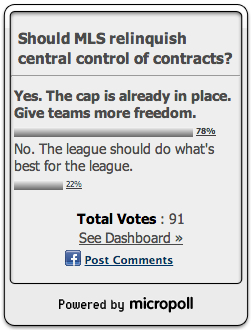