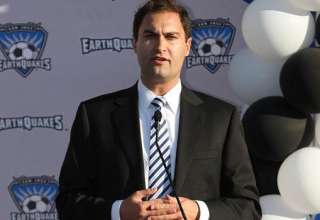 San Jose Earthquakes President Dave Kaval is one of MLS’s more public first executives. He writes a regular column, Kaval’s Kickoffs, on the club’s website, updated most Mondays with his reactions to the past week’s activities. He also provides an email address for reader response and apparently reads and responds to incoming messages (or at least to those with interview requests) quite promptly.

Accompanying the team to Montreal for their Saturday match with the Impact, Kaval made the most of his trip, blending his soccer duties and responsibilities with more touristy activities. He also took a few minutes before the match to chat with The11.ca.

He attributes his team’s first place overall ranking on the MLS table in large part to the spirit that head coach and former Canadian national-teamer Frank Yallop has managed to build in his players, the result being the squads rebound from a 2011 campaign that saw the ‘Quakes fail to qualify for the postseason.

“They really feel that in any match, at any moment, they can score and win. You saw that in our L.A. comeback twice this season or with (Steven( Lenhart over the last couple games. It’s really been incredible,” said a smiling Kaval. “In a lot of seasons you might have one game like this and we’ve probably had eight or nine. It’s unbelievable. It’s really a magical season and it’s a real credit to what our team’s been able to do. We’re taking it one game at a time as we move forward to the next level.”

While he does not travel to every away game Kaval does take part in the occasional road trip. This season, along with the standard goals of familiarization and team bonding, his trips outside San Jose have another, more concrete, focus.

“A lot of it depends on the stadium because we’re building a stadium in San Jose,” he explained. “The stadium here (in Montreal) has been renovated recently so I wanted to sit down with Joey Saputo and with all the team here and discuss with them what they built. There are lessons here for us and our design as we move forward with our construction and so that’s the key reason.”

As noted above, his visit was not all work and no play, as Kaval managed to find time to sample some of the non-soccer delights available to visitors.

“I always like coming to Montreal. I got my smoked meat sandwich, I had a poutine and I rode bikes around downtown Montreal today,” he said, sounding like the return visitor he is.

The bulk of the afternoon was spent touring the recently revamped Saputo Stadium. Guided by Impact President Joey Saputo and Vice President in charge of Stadium Operations Richard Legendre, Kaval saw the facility from stem to stern, spending about two hours taking in literally everything there is to see at the Impact’s home field.

“I’m really impressed with the feel of the stadium and how intimate it is with the roof,” he said after the conclusion of his visit. “We’re also going to have a roof at our venue so I think there’s a lot of things that make me feel more excited about our design because I think it’s similar. I think seeing it in person will be great when all the people are here. I think that’s going to be a real positive.

“Their stadium was built very, very quickly and so we want to make sure we have enough time to get the stadium built, up to speed and everything completed in an acceptable amount of time,” he continued.

Work is not yet underway nor is there a projected starting date for the soccer-specific installation that will replace Santa Clara’s 10,525-seat Buck Shaw Stadium with efforts presently being concentrated on completing the engineering drawings and preparing for the application for the building permits needed to undertake the project, one approved by the local municipal government in February of this year.

“It’s going to have a capacity of 18,000 and one reason we built it in a horseshoe is that the open end can be enclosed at a later date and take it up to 24,000,” Kaval said.” And if we need a bigger venue for a special game, like Montreal uses the Stade Olympique, we can use Stanford University so we have some options that work out pretty well.

“We’re trying to be measured about the dates and making sure that we understand the actual time it takes to build it, that it’s built the right way and that it’s not rushed. I think this is going to be our home for 30, 40, or 50 years to come so we want to make sure it’s done right.”