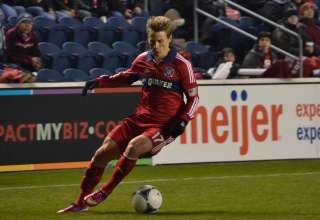 On Monday, Chris Rolfe became just the second non-Whitecap to win the MLS Player of the Week award over the last six weeks.

The Chicago Fire scored twice in this weekend’s 4-1 win over hapless D.C. United; Rolfe gave his team the lead just two minutes in, then scored from distance right before the halftime whistle.

The brace was enough to earn him the majority of first-place votes from the North American Soccer Reporters. With the Whitecaps losing this past week and Camilo scoring “just” one goal, Vancouver opened the door for another player from another team to take a POTW award. Whitecaps had won four of the previous five weeks. Well someone else has got to win the award sooner or later…

How The 11 voted: Yes, D.C. United is an awful team, and there should be some sort of caveat placed on a good performance against a team that is looking like a good bet to finish last in the MLS overall table. But Rolfe got The 11’s vote for a performance which saw him double his season goal tally from two to four.