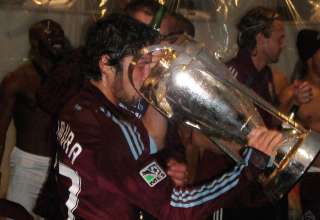 From 2010: Colorado Rapids’ Kosuke Kimura sips from the MLS Cup in the bowels of BMO Field.

As the Colorado Rapids gathered on a platform placed at the centre of BMO Field, jumping up and down, surrounded by sky-blue confetti, holding the MLS Cup aloft, FC Dallas midfielder Dax McCarty stood on the field, staring at the celebration.

The rest of his FC Dallas teammates, losers of a 2-1 decision after extra time in Toronto, had left the field. But McCarty stood and stared at the Rapids’ celebration. Wondering what could have been. Wondering what would have happened if a ball off the foot of Colorado sub Macoumba Kandji hadn’t taken a strange deflection off FC Dallas defender George John in the 108th minute and looped past the goal line. What could have happened in penalty kicks had John’s last-gasp effort at redemption, from point blank range, not been stopped by the outstretched hand of Rapids’ keeper Matt Pickens.

Right from the start of the game, the Rapids disrupted FC Dallas with tough tackling, turning the midfield into a quagmire of one-vs-one battles, with studs flying. The Rapids didn’t allow FC Dallas to establish its passing game. And even though league MVP David Ferreira opened the scoring in the first half by tapping home a perfect low cross from Marvin Chavez — after Chavez had taken a long lofted pass from Jair Benitez perfectly off his chest despite the swirling winds — the Rapids had simply imposed themselves on the game.

“That’s what physical play is,” said FC Dallas coach Schellas Hyndman. “It is disruptive. You can’t connect passes… If it was their game plan, it was perfect. If it wasn’t their game plan, we’d prefer to play the way we like to play.”

Referee Baldomero Toledo elected to leave his whistle in his pocket, and Rapids midfielders Pablo Mastroeni and Jamie Smith imposed their will on FC Dallas. McCarty, subject of challenge after challenge from Mastroeni, looked pleadingly to Toledo after every challenge, only to be told to play on time after time.

The Rapids got the equalizer they deserved early in the second half. A low cross from Smith brought game MVP Conor Casey together with FC Dallas keeper Kevin Hartman and Benitez. As the three went to ground, Casey had the presence of mind to stick out his right toe and push the ball over the line.

Jeff Larentowicz could have won it in regulation; his swerving free kick was deflected away from goal by Hartman.

After a cautious first extra time period, the game opened up in the second period as both teams searched for the winner and not settle on the lottery of penalties. Casey lofted a hopeful ball into the box for Kandji, who nutmegged John, then, off balance, nudged a ball towards the front of the goal. John, trying to recover, had the ball bounce off him and go into goal.

Hyndman said nothing needed to be said to his defender.

“The game of soccer is such a cruel game. You play for 90 minutes plus and it’s a game of inches.”
“What is there to say?” said FCD captain Daniel Hernandez. “It was a deflection.”

For Casey, who spent two games with Toronto FC in 2007 before being traded to the Rapids, victory was sweet.

“My time here (in Toronto) was short,” said Casey. “It was good to win here, period.”

And, the Toronto fans were clearly behind the Rapids. The reason? Because Jeff Cunningham, who is second all time in MLS scoring but was a bust in his time with the Reds, remains the most hated man to ever wear a Toronto FC shirt. When he was introduced as a sub for FCD in the second half, his every touch was met with a chorus of boos.

“We definitely noticed that we were getting the support,” said Casey.

Marvell Wynne, who spent three seasons with Toronto FC said he was inspired when he heard his old chant from his days at BMO Field being sung to him during the game.

“It was glorious,” he said of winning in Toronto. “I couldn’t have written it any better — to win it in Toronto, a city where I had given it my all for three years.”

There was some late drama. After scoring, Kandji was forced to leave with a sprained left knee. As Rapids coach Gary Smith had burned all three subs, his team had to endure a last FC Dallas siege with just 10 men. Pickens made the save on John; and Toledo allowed the game to go well past the 30-minute mark in extra time.

“It felt like another half,” said Wynne. “It took forever. It was so long. With every thrown in,every ball that went out, we were saying ‘blow the whistle.’ And it kept going.”