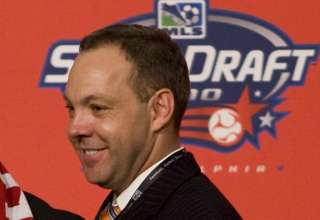 There were three major points to MLS Commissioner Don Garber’s announcement of proposed format changes to the league, made in a press conference at BMO Field ahead of the MLS Cup final.

(Now, before we go any further, it needs to be stressed that these are proposals, nothing has been set in stone. And, ahem, the U.S. will soon be presenting a World Cup bid to FIFA).

MLS will look at adhering to the international calendar. Basically, the league will look at a new format in which teams would start play in the fall, take a winter break, resume games in late February or March and finish the season in the spring.

“We’ve got to take the steps to figure it out,” said Garber.

Garber said Sunday’s MLS Cup, the coldest final on record, was a test — would Toronto soccer fans turn up for a game in November? But the question should be, will fans in Columbus, Chicago, Toronto or Montreal turn up for games in March if it’s regular-season battle between two mid-table teams?

And, “international calendar” is a total misnomer. Russia and the Scandinavian leagues play in the summer. Somehow, the fact that Italy, Germany, Spain and England play similar schedules has somehow given them the right to dictate the calendar to the world.

As well, MLS would insure there would be no way that two teams from one conference could cross over and be finalists in the other conference’s final — which happened in 2010 when Colorado beat San Jose in the, ahem, Eastern final. Garber said the geographical mixups are “counter-intuitive.”

Someone has to move. Garber and league executive vice-president Todd Durbin were adamant that the conference system is here to stay; not just this year, but five or six years down the road. And, next year, they promised each conference would have nine teams. With Vancouver and Portland, two Pacific-Coast teams, coming into the league in 2011, that would force one other team from the West into the East. Likely, FC Dallas would make the move, but that’s not set in stone. Breaking up Houston and Dallas might not be a path the league would want to travel down.