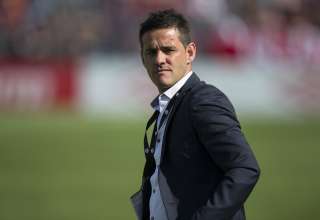 For months, Canadian national team coach John Herdman has been lamenting the women’s national team’s lack of wing players, and how he needs to find young players who can bring width to the side.

Enter Rachel Quon. In what has to be described as a surprising, maybe even a shocking switch, the former U.S. national team prospect is changing shirts. Quon, ironically, could be set to make her Canada debut in June 2‘s friendly against the U.S. at BMO Field — pending FIFA approval. On Wednesday, she was named to the roster for that June 2 game.

Quon, a fullback, was a standout with Stanford University, a regular for the Chicago Red Stars, played for the Americans at the U-20 World Cup in 2010, and started every game for the U.S. that same year at the CONCACAF U-20 Championships. She has been part of the U.S. national-team program since she was 14. She was born in Illinois. On the surface, you’d find nothing that links her to Canada.

“I am hoping that she can give us that little something different in the fullback position,” said Herdman in a conference call.

The Canadian Soccer Association is now working with FIFA to ensure that Quon is eligible to play. Herdman said that a national coach needs to invite a player to camp before the FIFA process can begin.

The process began last year, when Quon was still at Stanford. U20 national coach Andrew Olivieri had been scouting American prospects who might be available for Canada, and Quon does have a family connection to this country. She was approached, but injuries delayed a decision. She has started every one of the Chicago Red Stars’ games so far this season.

So, for Quon to put on a Canada shirt represents a major change.

If Quon does impress Herdman to the point where he decides to make her part of the national-team set-up, a discussion on whether or not the Canadian Soccer Association would have make her part of the 16 NWSL players whose salaries are paid by it wouldn’t come till the end of the seasoon.

Herdman said that it is “really a bit of a trial for Rachel,” and that the next couple of months will determine whether or not she becomes a regular part of the Canadian team.

And, just like Canada plucked defender Lauren Sesselmann from the American talent pool, Quon is definitely a case of cherry-picking talent. And, it makes it a lot harder for Canadian fans to hold a moral high ground if they choose to boo Sydney Leroux, who switched from Canada to the United States.

Herdman said he hopes that Canada won’t have to resort to plucking talent from other countries in the future; that the talent base within this country’s borders will supply the national program with all it needs.

“Our talent pool, our population base, is bigger than most of the countries we’re playing.”

As well, to shore up the fullback position, Finnish-Canadian dual citizen Kylla Sjoman, who played for the Ottawa Fury six years ago, has been named to the squad. If she plays at left back, it will mark only her second cap for Canada.

As well, forward Melissa Tancredi returns to the squad after taking off the better part of the year to focus on her education. Tancredi is a physical presence who will create space for all-time leading scorer Christine Sinclair up top. And, well, to be blunt, Tancredi’s physical game drives the Americans nuts.

“Melissa will bring in that real tenacity and toughness; she really relishes these kind of games,” said Herdman.

Canadian striker Jonelle Filigno was called to the squad but had to drop out due to family reasons. Herdman may bring in a replacement player.