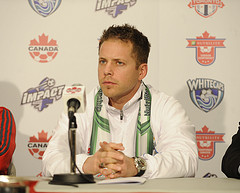 Ex-Montreal Impact boss Marc Dos Santos is ending his two year-stint in Brazil and will return to the NASL.

On Thursday, Ottawa Fury FC President John Pugh announced that Dos Santos would be returning home to become the team’s head coach for its inaugural season in NASL.

Dos Santos coached the Impact youth side, was the senior team’s assistant coach when it reached the quarters of the CONCACAF Champions League, then coached the team to a Division-2 title. But, in the Impact’s final NASL season (2011), he cough, cough resigned when the team got off to a poor start and, eventually, missed the playoffs.

But, as a youth coach in Brazil, he made his way to the famed Palmeiras club — and earned a lot of respect.

Yet, there was a strain on his family. His wife is from Montreal. And the challenge of taking on an NASL expansion team — in Canada — was too much to resist. And, after meeting with the Ottawa Sports and Entertainment Group owners, he knew what his answer would be. With a PDL program already in place, he felt there was a commitment to win.

“I need tough challenges in my life,” Dos Santos said from Sao Paulo in a teleconference. “My family is used to it. When I first spoke with John it was clear that this was a big challenge.”

With just seven international slots, he knows that Canadians and Americans will make up the bulk of the Fury’s roster. But he said he won’t accept mediocrity.

“I’m extremely competitive, I’m extremely ambitious,” “In my head, I know in an expansion year there’s not a lot of pressure to be super-good. But I put that pressure on myself.

Pugh said that it was clear that Dos Santos — who speaks Spanish, Portuguese, French and English — was the best man for the job.

“We are delighted to have a coach with a winning culture who has already had success in NASL,” he said.

And, if one day the Fury would meet the Impact in the Amway Canadian Championship, a tasty subplot is just waiting to be written.