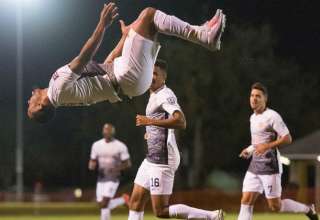 FC Edmonton got off to yet another poor start to a match, and the Eddies dug themselves a hole they couldn’t find a way out of.

Thanks to some wayward passes and defensive lapses, the Eddies gave up goals to Jordi Quintilla and Hector Ramos in the first 15 minutes, and they would stand up as Puerto Rico FC went on to a 2-0 win in a “home” match on a field in Kissimmee, Fla.

Both teams have long since been eliminated from playoff contention, and this was a make-up game for a September match that was postponed because of Hurricane Maria. Half the proceeds from Wednesday’s game will go to relief efforts in Puerto Rico.

PRFC have been without a home field since the hurricane hit, but the team looked awfully comfortable on a Florida pitch. In fact, they looked as comfortable as when they shellacked the Eddies 3-0 in Puerto Rico in the spring season, a game that still haunts FCE coach Colin Miller as one of the worst games he’s seen the team play since he’s been in charge.

Miller said, though, that even Puerto Rico is at the bottom of the NASL table, PRFC doesn’t play like team with a wooden spoon in its collective hands.

“We were always chasing the game against a team that I fell has a false position in the standings. They are better than their record shows.”

Five minutes in, and FCE keeper Nathan Ingham was picking the ball out of his own net, after Quintilla was given acres of space to shoot and pick the corner.

And, 10 minutes later, a poor cross-field pass from Ben Fisk was picked off by Michael Ramos, who made a quick pass to send Hector Ramos on a breakaway. The initial shot went off the woodwork, but the ball came right back to the shooter, and he converted.

Ingham made a huge diving stop off a 20th-minute free kick from Walter Ramirez to keep it from getting to 3-0.

The Eddies’ best chance of the first half came from Daryl Fordyce, who was sent in thanks to a nice pass from Fisk, but his shot was blocked by the feet of PRFC keeper Austin Pack.

Miller said that he felt that Fisk had one of his poorest showings of the season, and his bad pass led to a PRFC goal.

Miller said the Eddies’ game improved in the second half, but they could not find the net. Meanwhile, PRFC could have built on its lead; Hector Ramos pulled a shot just wide in the 50th minute on a three-on-two break.

Then, former Toronto FC forward Emery Welshman forced a diving save from Ingham.

Ingham was called in to make another great save off of Conor Doyle late in the game.

But Miller’s review of the keeper was mixed.

“He made some very good saves, saves that you need your keeper to make,” said Miller. “But he also made a mistake on the first goal, where he played a ball to Nik Ledgerwood that put him in a lot of trouble.”

He said that Ingham, as a young keeper, needs to work on his distribution.

“Making saves is the easiest part of the game. But, overall, this season, I have been satisfied with our two Canadian keepers (Ingham and Tyson Farago).”

Midfielder Dustin Corea, who was won the award as the team MVP as chosen by the supporters, did not make the trip with a knee injury. As Edmonton wraps up the season Saturday in Miami, we know he won’t play for the team again this season. On Tuesday, he tweeted his farewell to the club and its fans; but Miller said that the player has not been released.

“I have not released a player,” he said.