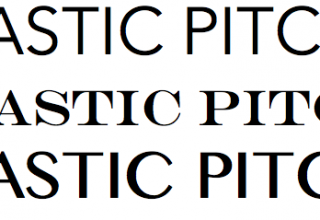 Still messing around with fonts! I'm leaning towards the one in Avenir, on top. Thoughts?

OK, as the Kickstarter campaign went past the $10,000 mark today, it became official. We’re committed to the Plastic Pitch e-magazine.

Look for our first issue to focus on “lost” Canadians, a look at players who, for various reasons, stepped out of the limelight and are now trying to re-establish themselves. We’ll also take a minute-by-minute look at Canadian in MLS since 1996. This hasn’t been the easiest assignment. As we dig through the league’s history books, we have to ask ourselves who counts as a Canadian and who doesn’t. Ugo Ihemelu, who grew up in Winnipeg, showed interest in playing for Canada, but then appeared with the U.S. program? Jack Stewart, born in California, but came to camp with Canada back in 2007? Rick Titus, a GTA product who later played for Trinidad and Tobago? And what to do with Teal Bunbury?

For those of you who haven’t subscribed yet, you still have about a day or so to pledge via our Kickstarter page. In a few days, we’ll have a button up on The 11 which will allow you to subscribe from the site.

Once again, to all our readers and supporters, thank you. And to our premier sponsor, Umbro Canada, thank you.

As for The 11? Look for us to relaunch in the next week or so; we won’t be reporting rumour stuff or press-release fodder, just full-length stories that won’t fit into the magazine for one reason or the other. Look for a focus on Canadian NASL news and national teams.