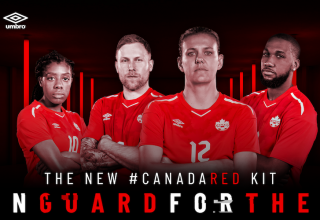 Google Analytics has taught me one thing. When you write about kits, you get way more interest than writing about players, games or, well, pretty well anything else connected to soccer. If a team launches a new kit on the same day Messi announces he’s leaving Barcelona to play in the Canadian Premier League, the kit story might win when it comes to views.

I am pretty sure, judging by how kit news makes soccer supporters slightly bonkers, that all of us are secretly huge fashion fans, in a way that other sports fans can’t understand.

It’s a simple, red kit, with the same number and letter font from Canada jerseys before. Gone are the stripes, replaced by images of maple leafs embedded into the fabric of the shirt. It’s a good, crisp, clean look.

But, let’s compare that to the Greatest Canada Kit of All Time (as decided by a jury of one, namely, me. Hey, I edit a magazine where we regularly feature fashion trends, so I’m qualified!).

And that’s the white Canada kit of the mid-90s. During this cycle, Canada also had a red home kit and a black third jersey, but it was the white kit that’s never been repeated in terms of sheer awesomeness.

First off, in the 1990s, the trend was to put as many different colours and designs into a jersey as possible. If you could get chevrons, stripes and polka dots — in five different shades of red, — on a shirt… good! This was the high point for busy soccer jerseys, before all the big manufacturers decided to clean things up and go with simple looks to start the new century.

The white kit was awesome for a number of reasons.

I still have mine; I bought it at Commonwealth Stadium during a Canada game. It was the first Canada shirt I bought It’s a prize possession. It’s the antithesis of what soccer shirts are today. But, as we welcome the new maple-leaf red shirt, let’s toast that fantastic maple-leaf shirt of 20 years ago.