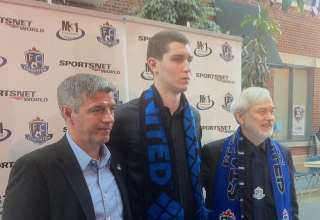 Control. That’s what Marko Aleksic will have to embrace as he moves from the ranks of FC Edmonton’s academy to the first team.

The 17-year-old six-foot-four centre back was announced as the Eddies’ newest player Wednesday at St. Joseph’s High School, the team’s base of operations for its academy program. He’ll join a backline anchored by Mallan Roberts, the physical defender who is still waiting on his Canadian citizenship, the experienced Albert Watson and Kareem Moses, the Trinidad and Tobago international signed by the club earlier this season.

“He’s very aggressive,” said coach Colin Miller of Aleksic. “One thing we’ll work on is how to curb his enthusiasm, less of the jiu-jitsu type tackles.”

As a raw product, Aleksic’s bio doesn’t read too much differently than Roberts would have when he was promoted from the academy to the first team. Raw. Unafraid. Aggressive. Ability to win ball in the box. Sometimes doesn’t know when he needs to rein it in. But Miller said that, surrounded by the likes of Watson and Moses — and an older, wiser Roberts — in a first-team environment will help Aleksic learn that control. And it’s an example why it’s important to bring players into a first-team environment at such a young age.

“If you look at the MLS draft, they are selecting 22, 23-year-old players,” said Miller. “In Europe, at that age, you have players who have 200 pro games under their belts. I’m not trying to put that down, it’s important to get an education. But, when you bring in a player into a first-team environment, he’ll be able to better handle situations down the road.”

Aleksic feels that he’s already on an advanced development schedule.

“I developed faster here than I would have with any other program in Edmonton,” he said.

“It’s a big day for any football club when a young player comes through your system and is a product of some terrific development,” said Miller.

Aleksic is the fifth player currently on the team from the academy ranks. He’s the seventh overall.

Where are the other six? Hanson Boakai is currently in Germany on a training stint with Fortuna Dusseldorf; Miller said the coaching staff there have called the midfielder an “interesting player,” and there will be more discussions between the clubs about the Boakai. Former national U-17 striker Sadi Jalali will be back with the club in the coming season. Roberts is a big part of the Edmonton back line. Midfielder Edem Mortotsi saw playing time in 2013. Defender Chris de Guise was not re-signed this season. Ajeej Sarkaria is now focusing on his education.

Aleksic joins veteran striker Frank Jonke as significant Canadian signings made in the offseason by the Eddies. Miller said more Canadians were on his radar, but several of his targets chose to try their luck in Europe, instead. But Miller is confident with the upgrades made to his team; he said that former Silverback midfielder Milton Blanco used to someone he would identify as an impact opposition player, and would demand his team shut down. Former Chicago Fire midfielder Mike Banner will add width and experience to the team. And he said that ex-Manchester United youth prospect Ritchie Jones was being courted by an MLS team, but that club couldn’t give the English midfielder the contract he wanted. That opened up an opportunity for the Eddies to sign Jones.