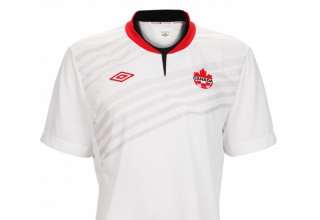 While our Kickstarter campaign (CLICK HERE) still shows us short of our target, I can announce that the dream to launch a PLASTIC PITCH e-magazine will become reality.

Today, Plastic Pitch welcomes Umbro Canada, the official supplier to Canada’s national teams and many, many youth soccer clubs across the country, as a premier sponsor. We’re proud to partner with Umbro. Of course, we’re all familiar with the iconic brand as the supplier of Canada’s national teams. But, as a supplier to many grassroots programs, Umbro is also supplying the young players who will become our national-teamers of the future.

Thanks to Umbro’s belief in the project, soccer supporters in Canada will have the chance to enjoy our new magazine, which will go in depth to feature stories you won’t find anywhere else. PLASTIC PITCH won’t be interested in following the mainstream stories that are covered (quite well) in the daily papers. We don’t need to give you the umpteenth Defoe feature, but we will ask what the signing of stars at TFC will mean for their Canadian-player development plans. We won’t chase down Designated Player rumours, but we will look at Canadians who are making less than $40,000 a year in order to chase their dreams of playing professionally.

We won’t write about the Premiership race, but we will care about the Finnish, German, Israeli and Hong Kong clubs where Canadians are playing. And, most importantly, when we write about MLS and NASL, we won’t be writing about how awesome Graham Zusi or Clint Dempsey or Landon Donovan are. Our goal is to probe the league’s Canadian content.

As for The 11? Look for it to be a support for the magazine. We will focus less on game reports (though we’ll still provide FC Edmonton gamers, and likely national team reports of some kind) and more on the features that, because of time issues, can’t survive the long lead times needed in the magazine world. One thing we won’t be doing anymore are the simple passing on of news from press releases. If we can’t find a new and original way to look at our stories, we won’t be writing them. Since NASL is our biggest draw in terms of readers (backed by our web stats) you’ll find more of a focus on that in our web writing. We’ll also keep close with the national teams.

Look for The11.ca to relaunch in mid-February.

Writers with story ideas should send query letters to teamworkpress@rogers.com; if you haven’t written for us before, I’d like to see at least one clip that’s non-soccer or, better yet, not even sports-related. I’ve always believed the best writers are the ones with range, and I’d like to see that.