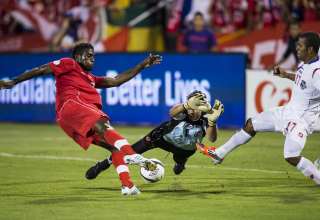 Entering Friday night’s match, the pressure was riding on Canada but now the boot is now on the other foot as Canada sits atop Group C in CONCACAF World Cup qualifying after a 1-0 win over Panama.

Sitting in first place coming into the match, the Panamanians would have been comfortable with a draw. But with wave after wave of the Canadian attack in the first half, the Canaleros looked certain to wilt under the pressure. But Panama responded with a better effort in the second half —but yet a cheeky quick free kick proved to be the difference as Panama fell to second in the group.

Canada’s coach Stephen Hart has been saying along that Panama was the strongest team in the group but that wasn’t the case on the pitch at BMO Field. Far from it — and, according to Hart, Panama fielded a strong lineup but perhaps the red and white surprised the visitors with its aggressive play early on.

“I saw a more aggressive Canadian team in the sense (it was) more aggressive in the play,” said Panama’s coach Julio Dely Valdes through an interpreter. “The game was very tight. At the beginning there was a bit of problems with set pieces and on the goal it was a bit naive. You cannot make these types of mistakes in World Cup qualifiers.

“As I said before they created some problems on set pieces, not really on any good combinations. Aside from the goal we came on strong in the second half and there were some really good combinations and I liked that.”

The only goal of the match came when Atiba Hutchinson thought and reacted quickly to find Dwayne De Rosario alone in front, who then easily tapped the ball in.

The tandem threat up front for Panama in the form of FC Dallas striker Blas Perez and forward Luis Tejada never materialized, save for a few fleeting moments in the second half. For the most part Canada’s midfield and back line remained compact and simply did not surrender much space, snuffing out any offensive flair the duo could conjure up.
Panama did not hang its heads as Roman Torres nearly equalized in the 83rd minute on a shot that sailed just wide across the face of goal. Then captain Felipe Baloy also sent a volley over top of goal in the 89th minute but it was too little too late for Panama.

“We had a situation where we were not paying attention and fell asleep as a team and that was the difference,” said Panamanian goalkeeper Jaime Penedo through an interpreter.

“Every game is different. I think this time the team was really balanced and it came back to that.”

The game did see its fair share of chippiness and heated exchanges. While being under siege in the first half, the Panamanians resorted to feigning injuries at the slightest touch. Tempers flared again at the start of added time in the second half when a Panama player was unable to retrieve the ball away from under the Canadian players’ bench drawing a crowd and resulting in more shoving.

But Penedo doesn’t think any of those tensions will carry over to the next match.

“I don’t think so. We’re professionals players and that’s part of the game. So now we just need to focus on Tuesday’s game.”

So that sets the scene for the next match in Panama. A noisy crowd in Toronto will be just drop in a barrel compared to what’s expected in a hostile, boisterous Estadio Rommel Fernandez in Panama City on Tuesday night.

Coach Valdes can take comfort in the fact that his squad still has two more games at home which will be tough environment for their opponents.

“What we knew before coming here was that we had two games at home and those games at home we have to go and make it happen,” said Valdes. “We have to analyze now the game for Tuesday.”

Panama relinquished the driver’s seat to Canada but is determined to snatch it back. Needless to say the importance of the next match wasn’t lost on its players, especially with Honduras picking up a 3-0 road win over Cuba and sure to collect another three points at home against the Caribbean nation.

The goal for Panama is clear — win and everything will take care of itself.

“All we need to do is win because that’s the equation to qualify for the World Cup. That’s the opportunity we have at home to make it happen,” said Penedo.