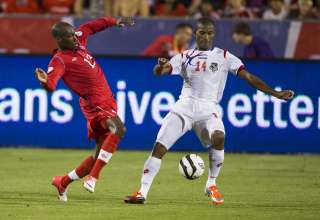 It’s a goal that will loom large in Canada’s history, yet it was completed before almost anyone realized what happened.  A canny free kick from Atiba Hutchinson caught the Panama defence flat-footed and Dwayne De Rosario was there to convert the winner in Canada’s huge 1-0 victory in World Cup qualifying play in front of a very pro-Canada crowd of 17,586 at BMO Field.

With the match scoreless through 78 minutes, Canada picked up a free kick just outside the right edge of the box following a foul on Simeon Jackson. Hutchinson took a couple of slow steps towards the ball and then immediately lofted it across the field to a wide-open De Rosario.  The quickness of the play certainly left the Panamanians surprised and it almost caught De Rosario off-guard as well, but the forward buried the chance.

“Atiba is an experienced player.  When you see an opportunity you penetrate and attack it, and that’s what he did,” De Rosario said.

“He didn’t ask for a whistle, we made eye contact and he played a great ball in.  My focus was just keeping my eye on the ball, getting over and putting the ball in the back of the net.”

It was a play borne of both an error by Panama’s defence and Hutchinson instantly realizing he could capitalize.

“That was a perfect opportunity where there was nobody in front of the ball,” Hutchinson said.  “They kind of turned their backs.  I didn’t really think twice about it, I just put it in, saw Dwayne was there and he took care of the rest.  Dwayne’s always ready to put it in the back of the net.”

“Hopefully I can have more special moments in the future but I’m happy I got the moment in front of our fans and most importantly we got the win,” De Rosario said.

Canada leaves BMO Field with a much-needed three points and now sits atop CONCACAF Group C through three of six matches.  Canada’s seven points (2-0-1) are one better than Panama and three better than Honduras, who picked up a 3-0 victory over winless Cuba earlier today.

Panama entered the match unbeaten in two group games thus far and, with Canada facing upcoming road dates in Panama City and San Pedro Sula, it could be said that this was a virtual must-win for the Canadians on their home soil.  Canada head coach Stephen Hart didn’t want to put quite so much importance on the result only halfway through the competition but admitted it was a big result for his side.

“You have 12 points to play for but you can’t play one game before you play the other,” Hart said.  “I wanted us to be aware that if we get three points here, good.  If you get one point, there’s still a lot to play for.  You have to look at it that way.  It was important playing at home to break that hoodoo and get the goal.”

It was Canada’s first goal in two home matches in the tournament and early on, it looked like a replay of the 0-0 draw with Honduras on June 12.  Canada were clearly the better team in the opening half and yet couldn’t translate that edge in possession and chances (7-3 in first half shots) into a go-ahead goal.

The Canadians were just a bit off in terms of putting the final touch on headers or when it came to connecting or receiving crosses in the first half. Kevin McKenna had two header attempts, the second of which was a tremendous chance in the 36th minute that bounced off the far post and wide.

For the first 10 minutes of the second half, however, Panama came to life and took it to Canada, creating more pressure than in the entirety of the opening period.

“I thought the first half was one of the best first halves I’ve seen from Canada,” Hart said.  “For some reason in the opening of the second half we gave them too much space to play, especially in midfield.  They started to thread the ball between us and we had to make some adjustments.  We settled down in the last 15 minutes and the rest is history.”

The game also had more than its share of chippy play, resulting in five bookings and a couple of pushing-and-shoving situations on the pitch.  The most overt of these occurred in the 90th minute, then the ball went into Canada’s bench and a Panama player’s attempt to retrieve it led to an alleged foot-stamp and a minor fracas between the two teams.

Between the physical play and the missed chances, however, Canada kept its composure.

“You kind of always have to believe, you know?” Hutchinson said.  “We did well, we were creating chances but hitting it off the post and missing a header here and there.  We still believed and thought it could come at some point.”

Hart made a couple of substitutions, bringing on Tosaint Ricketts and Patrice Bernier in place of Olivier Occean and Will Johnson in the 66th and 71st minutes, respectively, to help shore up a midfield that Hart said was losing its shape.  Hart also noted that Johnson was playing too tentatively following a first-half booking and thus inserted Bernier, who “pulled us back together.”

While the attack finally arrived for Canada, it was yet another clean sheet on the defensive front, as Canada has yet to concede a goal in three Group C matches.  Goalkeeper Lars Hirschfeld faced only two shots on target in the game and only faced one truly dangerous chance, a screamer from Roman Torres in the 83rd minute that flew just a bit wide of the left post.

“Collectively it’s not just the defence,” Hart said.  “Good work by the midfield.  The defence today got battered around.  [Panama has] two strikers with good leaping ability, they can hold the ball up, they like to play little combinations.  But we held on, defended with some intelligence and we got the result on the back of good defending.”

Canada will have little time to rest on its laurels as the next game is on Tuesday, a return fixture in Panama City.  A win would almost guaranteed Canada a top-two finish in the group and advancement to the final qualifying round, though it will be a very tough road atmosphere in Panama, particularly given the heated play in Friday’s match.