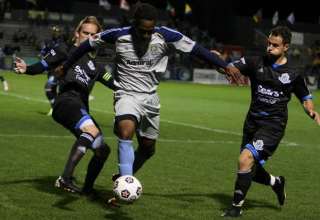 FC Edmonton’s playoff hopes are on life support, but there is still a faint pulse.

A last-gasp injury-time goal from Shaun Saiko — set up by an excellent run from midfielder Bryan Arguez – allowed the Eddies to escape, Blaine Minn. with a 1-1 draw with the Minnesota Stars.

But, with the draw, the Stars remain eight points ahead of the Eddies for the sixth and final playoff spot in NASL. Both teams have three matches left. And, the draw allows Minnesota to claim the season series against the Eddies.

To show just how bad the Eddies knew that they needed the three points, Saiko lunged into a slide tackle as soon as the Stars took the kickoff after the equalizing goal, showing how badly he knew the Eddies needed to steal possession back and create one more chance before the final whistle. That didn’t happen.

What makes the Eddies’ inability to make up ground on the Stars all the more frustrating is the fact that Minnesota is on a nine-game winless streak. The Stars have left the door wide open for the Eddies, but FCE hasn’t been able to put together any kind of streak of results that would allow them to take advantage of Minnesota’s winless streak.

“It’s not in our hands anymore,” said coach Harry Sinkgraven after the match. “They have to lose everything and we have to win everything, but there is still a chance.”

There would have been no chance at all had the Eddies not found the equalizer just seconds before the final whistle was blown. Arguez made fantastic run, beating two defenders, before setting up Saiko for the goal.

The Stars grabbed a lead before the game was 20 minutes old. After Saiko was called for a foul, Jamie Watson — who just came to the Stars on loan from Orlando City of the USL — took the free kick quickly, before the Eddies had a chance to set themselves. Justin Davis took the ball down the left wing and laid in a cross for Walker, who had nothing but a fairly routine tap-in on a flat-footed Eddies’ defence.

The goal was a little bit reminiscent of the marker that gave Canada the 1-0 win Friday over Panama in World Cup qualifying.

“We have a free kick (against) and we are not organized,” said Sinkgraven. “Someone has to stand in front of the ball to give us a chance to get organized. That happened a couple of times in that first half, and it is something we have to work on.”

In fact, Minnesota could have made it 2-0, but Cristiano Dias headed just wide off a corner.

Edmonton flooded bodies forward in the second half, knowing that they needed goals. In the 69th minute, a cross from Kenny Caceros found Kyle Porter open at the far post and with Minnesota keeper Matt Van Oekel at his mercy. Porter played the ball off the outside of his foot, and it went in across the face of the goal, rather than in it.

With the Eddies going forward, they were going to get caught at the back sooner or later. Soon after the Porter chance, Davis and Miguel Ibarra steamed forward on a counter. Davis placed the ball in the box for Ibarra, but what looked like a sure goal was foiled by a last-ditch sliding block by Kevin Hatchi.