July 12, 2020
9 New Articles
Home MLS Vancouver Whitecaps One shot on target over two playoff legs: An embarrassment for the Whitecaps 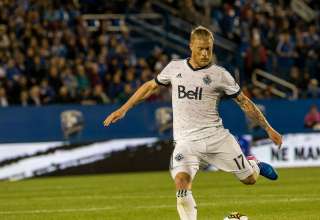 I wonder what was going through Stefan Frei’s mind over the two legs of the Seattle Sounders Western Conference playoff triumph over the Vancouver Whitecaps.

After all, the Sounders goalie had a lot of time to think and walk around and ponder his existence. Was he wondering what he was going to binge watch on Netflix? Imagining his next haircut? Trying to recall the Swiss starting XI from the 1994 World Cup? Figuring out the meaning of life, the universe and everything?

He certainly didn’t have to worry about the Whitecaps. Over two legs, the Whitecaps generated but one shot on target. That “scoring attempt” came in the 65th minute of Thursday’s second leg in Seattle. Christian Bolanos’s harmless header fell straight into Frei’s arms.

And that was it. The full sum of the Whitecaps, ahem, might, through two legs of soccer.

Make no mistake, one shot on goal over 180 minutes is embarrassing. It’s as bad as losing 10-0. You can point to the fact that forward Yordy Reyna didn’t start the first leg and might not have been healthy for the second. But, at some point, you need to make a pass. You need to take a chance. You need to get a cross or a set piece in that clears the first defender.

In the second leg, after going down 1-0 to a 56th minute goal from Clint Dempsey, we were subjected to watching the Whitecaps defenders scramble to stop a Sounders attack and either make a poor pass attempt to the midfield or just hoof the ball up the field.

Yes, coach Carl Robinson’s tactics were an issue. The Whitecaps isolated their forwards; Fredy Montero was left on the periphery for two games. But, wow, there was also a lot of players who couldn’t win 50-50 battles against the Sounders, the wingers failed to get past the Sounders fullbacks. When you need players to reach back, there was nothing but resignation. You didn’t see any Whitecap on the field displaying the body language that would suggest they they were the least bit desperate.

And Frei could have gone up in the stands, grabbed a beer, and watched it all.

Dempsey had a brace on  the night. Yes, there will be those who will wonder if Dempsey should have been playing at all, after MLS’s Disciplinary Committee decided to not add any games to the mandatory one-game suspension he received for the red card on the final day of the regular season. But, when the other team can only bother to get one shot in 180 minutes, complaining about Dempsey’s participation, well, seems kinda moot.

Dempsey’s opener came after Cristian Roldan’s clever back-heeled flick got him the ball at the top of the box. He shuffled the ball to his left foot and picked the corner.

His second goal, in the 87th, saw him outleap Whitecaps defender Jordan Harvey to get on the end of a Victor Rodriguez cross.

Credit Seattle for defending deep and holding the line. Credit them for winning ball after ball in the midfield. Credit them for getting to every long ball hoofed up the field by Harvey and Marcel de Jong. But, come on, with no invention, no willingness to take risks, the Whitecaps can only resign themselves to the fact they did very little to try and change the momentum.

Last year, the Sounders won MLS Cup in a game in which they did not get a shot on goal. So, the Whitecaps tried to out-Sounder the Sounders over these two legs. It was awful to watch, a dreadful advertisement for MLS. There are probably people who are out buying New York Cosmos jerseys and “Rocco is Right” T-shirts based on those 180 minutes of soccer.