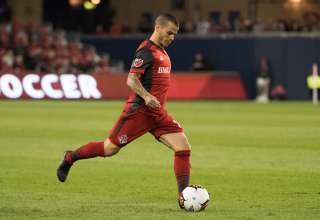 In the previous 21 MLS seasons, only six times has the team with the best regular-season record gone on to win MLS Cup.  And it’s only happened twice in the most recent 14 campaigns.

In MLS history, only twice has the team that lost the previous season’s MLS Cup final gone on to win the championship the next season.

Let’s face the facts: The MLS Cup format favours the team that needs to get hot just to get to the post-season, and then enters the playoffs playing its best soccer of the year. History shows us getting on a streak is a better formula than winning the Supporters’ Shield and being on cruise control heading into the post-season.

So, despite a record-setting campaign, a student of MLS history would suggest Toronto FC, by winning the Supporters’ Shield in a season following an MLS Cup-final loss, well that’s a double-whammy. That’s sticking your middle finger right up into the faces of The Fates.

Let’s crunch some numbers. Based on the previous 21 seasons of MLS history, Toronto FC’s odds to win MLS Cup in a year
a) it finishes first overall;
b) lost a final the season before;
Well, they should stand at about… 2.86 per cent. For the math geeks, that’s (six double winners/21 seasons) x (two winners coming off MLS Cup losses/20 seasons).

Luckily for Reds fans, soccer isn’t played in a lab. And, if any team is going to defy the odds, this special team just might. Yet, here comes another historical caution: This year, the Reds broke the 1998 Galaxy’s record for points in a season. In 1998, that then-record-setting Galaxy team didn’t even make it to the MLS Cup final.

Toronto’s playoff campaign began Monday in New York, er, New Jersey – and the Reds did not show indications that they would become just another historical footnote. They beat the New York Red Bulls 2-1 in the first leg of their playoff series. Now, the Red Bulls know that to survive, they need a bare minimum of two goals at BMO Field. They need to open up and attack, and thus leave themselves open to the lethal finishing of Sebastian Giovinco and Jozy Altidore, and the deft playmaking of Victor Vazquez.

“You know, we like having them (the road goals), but there’s still 90 minutes to play, and we’ll find out how big of an advantage they are once we get to the end of the next game,” said TFC coach Greg Vanney. “But it’s good to go home with some advantage and now it’s important that our group realizes, as they did when we came in, that they’re only halfway there, and they still have a lot of work to do to try to close this out.”

And, if anyone is going to beat the TFC juggernaut, the team has to play as close to mistake-free soccer as possible. The Red Bulls did not do that. Just eight minutes in, Red Bulls keeper Luis Robles made an absolute hash of a low cross from Altidore; inexplicably, he parried the ball straight out from his goal. The ball came to Vazquez, who deposited the absolute gift from the New York keeper into the goal.

“I don’t know, maybe he could have punched it a little more, but I mean, we lose a bad ball, we get beat too easy,” he said. “It’s a good whip ball in the box. Those are ones that always are difficult for goalkeepers to deal with. You know, and then it winds up going to their guy, and then you have a good finisher in Vazquez when he collects the ball, and he does a good job.”

The Red Bulls tied the game right before halftime on a Daniel Royer penalty; but TFC got its second road goal — and what might be the dagger plunged into the heart of the Red Bulls — thanks to a bending free kick from Giovinco. But, as good as the free kick was, Robles has to take some of the blame. He set up for the free kick cheating right up against the far post, giving Giovinco all of the near-post side of the goal to shoot at. There’s no way on a Giovinco free kick that a keeper can cheat that badly and give up that much of the goal.

Well, take that, soccer gods. Round one to TFC.