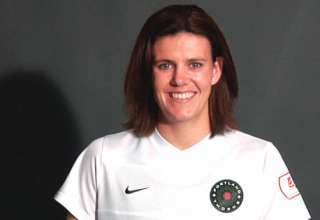 A couple of weeks ago, there was a Twitter exchange amongst Canadian soccer followers, spurred by Canadian Soccer News columnist Duane Rollins, about Christine Sinclair’s prospects of winning the national women’s player of the year crown in 2013.

Sinclair, Canada’s all-time leading scorer, and the best player (male or female) this country has ever produced, has won the award 10 times, including the last eight years in a row. You could rename the women’s player of the year award “The Sincy” and no one in this country would complain.

But, the fact is, going into the NWSL final, Sinclair may not have been the favourite of some of the voters. She had eight goals for the Thorns this season; not a bad return. But, compare her work to Diana Matheson’s. She also scored eight times, but for what was by far the worst team in the league. If Matheson didn’t score or set up the goals, Washington didn’t score. And it would be easy to argue that Matheson’s scoring feats were more impressive than Sinclair’s in 2013.

And, Erin McLeod, through some fantastic performances in friendlies, tournaments and for the Chicago Red Stars, has really upped her reputation as one of the best female keepers in the world. At recent FIFA visits to Canada, I’ve heard officials repeatedly state that McLeod is one the three best keepers in the world. Just go back to that friendly in Germany earlier this year — a a game Canada deserved to lose by a bunch was kept close thanks to McLeod.

Sinclair had the advantage of playing on the Thorns. While the club finished third in the regular-season standings, back when the rosters were drafted, Portland was everyone’s favourite for the title. So, even though Portland had to go on the road to beat the Western New York Flash 2-0 in the final, the fact that the Thorns won it all had a feeling of destiny to it.

It was a good night for the Canadians involved; keeper Karina LeBlanc made a series of excellent saves, the best coming early in the match when she leaped to deflect Samantha Kerr’s headed effort off the bar.

American Tobin Heath scored on a 25-yard free-kick rocket to give the Thorns the lead, and then Portland survived going down to 10 after the hour mark. Kathryn Williamson received her second yellow for tackling Abby Wambach.

But, Portland not only survived, but thrived despite being down a player. Finally, in time added on, Alex Morgan’s pass sent Sinclair in alone, and she finished the chance, and put the final nail in the Flash’s coffin.

For Canadians, it was a small consolation for the 2012 Olympic semifinal; Sinclair had triumphed over Wambach, the women’s player that supporters on this side of the border love to hate.

But is it enough to put Sinclair in the lead for her ninth straight player-of-the-year award? Probably. Remember that she has a huge advantage because of all the voters who will tick off her name as an automatic choice. Even though Matheson and McLeod have certainly made their marks, beating Sinclair for the year-end award is kinda like trying to beat a Conservative candidate in Alberta. You need to fight history.