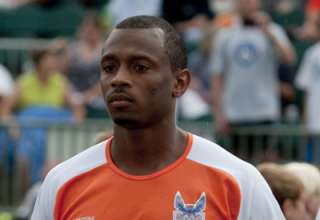 It might seem like a strange decision. Chris Nurse, in search of another second-division title, came to a franchise that finished in last place in the league last season.

“I wanted to be part of a team that will contend for the championship this season,” said the England-born Guyanese national teamer, who split last season between the Carolina RailHawks before making a return to the Puerto Rico Islanders.

Nurse, who was one of the 16 players already named to the FC Edmonton roster on Monday, believes the team has the talent to go from worst to first under new coach Colin Miller. And, he thinks the addition of a number of NASL veterans, including himself, will help push a young, talented squad to new heights.

“Wes Knight, he’s won at this level (got to a final in ’09 with the Whitecaps),” said Nurse at FCE’s training session Tuesday at Commonwealth Fieldhouse. “(Neil) Hlavaty has won a championship. I’ve won a championship at the second-division level. We have done it before and we can win another second-division title. We have players like (Shaun) Saiko and (Paul) Hamilton, who were both league all-stars.”

As well, former Minnesota Star Martin Nunez and Canadian Edson Edward, who teamed with Nurse in Puerto Rico, are also in camp. That’s even more NASL experience, a far cy from the dependence on French talent that was brought in last year.

And, so far, Nurse has favourable reviews for how coach Colin Miller is conducting camp, putting a premium on fitness.

“The coach is very disciplined,” said Nurse. “He is looking at what didn’t work last year and what worked. So far, the sessions have been very enjoyable. We know that if we have discipline, if we work hard, then we have a chance at becoming a winning team.”

Nurse knew the writing was on the wall for his old club, the Islanders, at the end of last season. The club has taken the 2013 season off in order to reorganize. Nurse has fond memories of playing on the island.

“It was a great club, great fans. It’s certainly hard to see what has happened this season, but hopefully they are back next season and can get back to where they were as a club.”

Nurse said one of the major reasons he made the move from Puerto Rico to Canada is that both offer two of the easier routes to the CONCACAF Champions League.

“It’s the top competition in the region, and it’s possible for second-division teams in Canada and Puerto Rico to get there; in the U.S. it’s almost impossible. I’m really looking forward to playing the Whitecaps.”

There’s lots of reasons Nurse is looking forward to that Amway Canadian Championship semifinal, which begins April 24 at Commonwealth Stadium with a return leg a week later at B.C. Place. Not only does Nurse — who, before going to Carolina, was part of a Puerto Rico team that collected a series of MLS scalps — want to be part of another David beating a Goliath. He also wants to hold one over one of his closest friends.

Back in England during the off-season, Nurse trained with Nigel Reo-Coker, who just signed with Vancouver.