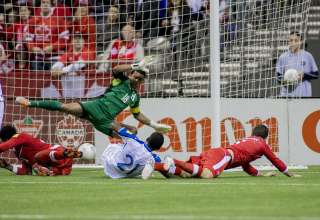 It's in! It's in! PHOTO: BOB FRID/CANADA SOCCER

Who knew that an exorcism could be achieved with such an ugly goal? Such a beautiful, wonderful, ugly goal, that is.

In the 38th minute of Friday’s CONCACAF Group A World Cup qualifier against Honduras, Junior Hoilett, making his “A” debut for Canada, scooted down the left wing and delivered a great cross to the back post. Will Johnson headed it towards the centre of goal. But, striker Cyle Larin had already fallen down; no matter, the ball bounced off Larin’s midsection and crawled across the goal line.

It was a goal that won’t be remembered for its quality; but for its impact.

That, ahem, “strike” did more than propel Canada to a vital 1-0 win in front of 20,108 — which, based on volume, often felt twice that size — at BC Place. It helped bury the skeletons of 2012. The 8-1 loss to the Hondurans that knocked Canada out of qualifying for 2014 World Cup would not be avenged by an audacious strike, but by a ricochet and a ball limping over the line.

Excuse us while we snicker. For just a little bit.

“When I got up, I didn’t even know that I hit it,” said Larin. “Then when I saw it on the screen and I saw it hit off my back, I knew it was my goal.”

Hoilett is Larin’s roommate in the Canadian camp; fitting because they both hail from Brampton, Ont.

“We’ve been talking about where we went to school and stuff like that,” said Hoilett. “It was great to bring that Brampton work onto the field.”

Johnson enjoyed it, as well.

“He’s got a better chance of breaking De Ro’s [Dwayne De Rosario] record than I do,” Johnson said of Larin’s goal. “Hopefully, he remembers me when he does.

“We’ve come a long way since the last time we played them in Toronto [a disappointing draw ahead of that infamous 8-1 loss]. I think Junior made a big difference tonight. I’m not sure that we’d win this game without him.”

Minutes before the Larin goal, team captain Julian de Guzman — set to miss this weekend’s Soccer Bowl because the NASL scheduled the biggest game of its season against an international break — rocketed a volley from just outside the box that forced Honduran keeper Noel Valladeres into an athletic save. Had that gone in, we would have spoke of the majesty of that goal for weeks. But, no, we can sorta cover our mouths like kids who got away with something because our goal came in a far more ignoble fashion.

In the second half, Johnson smashed a free kick that Valladeres was able to paw off the post.

Johnson, whose MLS season has been plagued by injuries, was excellent, as were his midfield partners, de Guzman and Hutchinson. In fact, JDG and Hutchinson were so energized, so excellent in their possession and decision-making, that you’d think they’d wound back the clock 10 years.

Canadian national-team coach Benito Floro said that the three veterans have shown that their birth certificates don’t matter. They bring passion and energy to the team, and are all in great shape.

“I’ve been waiting for this for years,” said de Guzman. “I remember 2008, at home against Jamaica. We were in the lead, it was an important match for us, and they ended up tying it. The rest was history and go back to 2012, we ended up against tying against Honduras at home. We dominated that game and couldn’t come out with the win that we needed. And that affected the result for us [8-1] and the end of everything. So, this win was very special. I think a lot of the guys… it was a different feeling we had going into this game. Felt a lot more confident. We had the right players involved. Everyone finally believed in us.”

Johnson said the win is nice, but 8-1 was a long time ago.

“I don’t think we’ll ever forget it, but I’m definitely past it. It doesn’t matter to me anymore. In this game you have ups you have downs… for me, the score in that game didn’t matter to me as much as the opportunity to go to the hex that we missed. It probably would have been more painful had it been 0-0 in the 95th minute and we lose by one.”

Canada needs to finish in either first or second in Group A in order to qualify for the Hex. Mexico beat El Salvador 3-0 Friday. Canada will play in El Salvador Tuesday.

But Floro said that he is “sure” that Canada’s next home “A” match, set for March against Mexico, will be played in Vancouver. The atmosphere was outstanding, and many of the Canadian players said they’re looking forward to a return engagement at BC Place.

“I am sure we are going to play against Mexico here,” said Floro.