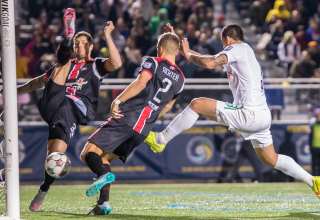 If you’re an Ottawa Fury fan looking for solace, for a shoulder to cry on, don’t read this. Because you might not like what you read; it might feel like salt in the wound.

Look, everyone reading this post gets what you’re going through. Your team has got so close to the final — pretty well the entire Canadian soccer community was behind you — and you end up losing 3-2 to the New York Cosmos. The team that every NASL fan outside of metro New York loves to hate wins the Soccer Bowl, while the best feel-good story in the league has a final chapter that isn’t quite so happy.

And, when you’re distraught about the result, chances are you’re replaying several incidents over and over. You think about how your team got the short end — how the world has conspired against you.

Of course, there will be much debate over the red card that referee Alan Kelly gave to Ottawa fullback Mason Trafford. It came in the 68th minute, with the Cosmos clinging to a 1-0 lead. Trafford and New York’s Sebastian Guenzatti got mixed up in the challenge near the sideline. Guenzatti went down, and it looked like Trafford looked to leap over the Cosmos player. But Guenzatti wasn’t still, he was rolling — and Trafford badly mistimed his leap. Put together those two factors, and you have Trafford landing squarely on Guenzatti; two feet came down, the second coming down later than the first — which looked like a stomp.

Was it an accident? Absolutely. Was it avoidable? Probably. Was it red-card worthy? For sure.

It’s not Kelly’s job — nor should it be — to judge intent. He can only judge the play based on what he sees in the split second he has to make that call. And he sees Trafford come down and plant — hard — on Guenzatti. He has no choice but to go with the red.

It sucks, for sure. And, there’s no way Trafford should be suspended for more than one game next season. He should miss the Fury’s 2016 opener, and be back for game two. You can’t judge intent when calling the foul, but you can consider it when looking at the length of the suspension. Trafford doesn’t deserve to have the book thrown at him.

Now, before the Fury fans scream blue murder, I have more to write that probably will make them angrier.

Gaston Cellerino scored three times, and it was enough for the Cosmos. But a New York fan would likely point out that Kelly made some very Fury-friendly calls through the match. The two highlights:

1. He did not give the Cosmos a first-half penalty even though Trafford put Roversio in a bear-hug and dragged his quarry to the turf. That was a stone-cold penalty, even if you’re the sort who’s OK letting defenders getting away with the odd jersey grab. This was a flat out tackle, and the ball was headed for Roversio at the back post.
2. Kelly waved off a Cosmos goal later in the game, calling Raul for infringing on Fury keeper Romuald Peiser. That’s a 50-50 call, and it could easily be argued that Raul was guided into Peiser by the Ottawa defender. While not as clear-cut as the penalty that wasn’t given, there’s still a solid case to be made for that goal to have stood.

We also have to accept that the Fury players themselves were culpable in the three Cellerino goals.

Cellerino’s first goal came thanks to some awful defending; he was outnumbered two-to-one going into the penalty area, but snuck through and scored. It looked as if the Ottawa defenders were expecting a foul to be called and then were caught napping when Kelly (correctly) played the advantage.

Jeremy Gagnon-Lapare came on as a sub and was immediately burned by Cosmos winger Walter Restrepo; his floated cross led to the second goal.

And Cellerino went in alone for the third goal.

Basically, an Ottawa team that prided itself on its defence all season long was caught napping several times — and was burned.

Look, I get that there’s no way that this game should have been played on the international weekend. There’s no doubt that Ottawa didn’t feel the loss of Julian de Guzman, who was outstanding for Canada on Friday. It’s something that NASL has to make sure never happens again — a championship game clashing with an international weekend.

Tom Heinemann scored twice for the Fury, both goals coming with his team down to 10 men. If you don’t love the way Tom Heinemann plays, well, that’s your problem. I will leave this column there, on that high note. Because, on a Soccer Bowl day filled with clouds, he was Ottawa’s silver lining.