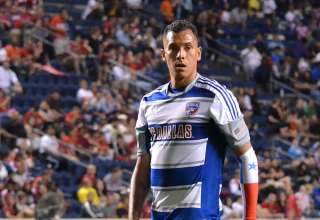 Going into Saturday’s match in Frisco, Tex., FC Dallas had yet to lose a game at home this season while the Montreal Impact was still in search of its first point on the road.

At the conclusion of play, the situation remained unchanged as the host club came out on the popular end of a 2-1 match.

Yesterday, Impact gaffer Jesse Marsch identified Dallas as an offensive force despite the absence of injured star midfielder David Ferreira, saying that the key to Impact success rested on countering the opponents’ still-dangerous attack. While Montreal accomplished this in the first half and took a lead early in the second, it was unable to hold onto it, once again falling to late-game markers that left the Impact disappointed at the final whistle.

Marsch made only one change to the starting XI from the team’s first-ever win, last Saturday’s 2-1 triumph over Toronto. Captain Davy Arnaud was back in the lineup after watching the start of the last game, but playing up front behind Bernardo Corradi in the 4-4-1-1 formation that began the game, rather than in his traditional midfield spot.

The wind, as important a player as any of the 22 men on the field, made Donovan Ricketts’ first half goal kicks both adventurous and mysterious, limiting their distance and allowing for extended hang time that permitted repeated bumping and thumping as players upfield awaited the ball’s drop.

While both teams had chances, Ricketts was far more active than his counterpart in the early going, his first save coming in the fourth minute as he deflected a Blas Perez header over the bar. In the 24th, he fumbled an easy ball, recovering and controlling it a split second before the arrival of onrushing Dallas midfielder Brek Shea.

Ricketts charged out to meet oncoming Fabian Castillo in the 33rd on a play ruled offside and in the 45th made a diving save on the Colombian forward who proved to be FC Dallas’ most persistent offensive threat.

At the other end of the field Kevin Hartman did not face a single shot, but Arnaud put one off the left post in the 32nd minute, a try made possible by a Felipe pass. Eight minutes earlier Arnaud came close but was thwarted by defender and former Winnipegger, Ugo Ihemelu, who forcefully and legally refused him the inside lane to the net as the ball rolling harmlessly into Hartman’s hands.

Referee Ramon Hernandez warned four players for their actions in the first half, three of them wearing blue, and issued one expulsion. It went to Impact equipment manager Aldo Ricciuti in the 44th minute, Marsch’s protests on the matter going unheeded.

After controlling the action for the bulk of the first half, Montreal saw the momentum turn in favour of the home side as the final minutes ticked off but regained control as the second half got underway, threatening in the first minutes

Dallas defender Zach Loyd took down Arnaud from behind in the penalty area during the 61st minute earned Montreal a penalty kick and Corradi buried the ball in the mesh behind Hartman, finding the top left corner as the keeper leapt the other way.

In the 69th minute Perez, left unmarked an unnoticed in the six-metre box, headed home a rebound to give hope to the crowd of over 16,000 fans.

Eleven minutes later a nifty play drove a stake through any hope the Impact still had of escaping Frisco with points to their credit. Perez headed a Loyd throw-in towards Castillo who flicked it to Shea on the first touch. The courageously coiffed US U-23 team member who spent the off-season training with Arsenal, all but invisible in the preceding 87 minutes, slipped behind Shavar Thomas and beat a diving Ricketts to cap the evening’s activities.

Montreal next takes to the pitch in Washington on Wednesday evening while Dallas meets the Whitecaps in Vancouver next Saturday.

THROW-INS – Seven FC Dallas players have started all the team’s games thus far this season. The Impact roster features only three who can make the same claim.

• Of the six men on the Montreal roster who wore Impact colours in last season’s NASL campaign only Miguel Montano and Sinisa Ubiparipovic have seen MLS action so far this season.

• Montreal midfielder Justin Mapp began the evening 32 minutes short of 15 000 for his career.