December 06, 2022
9 New Articles
Home NASL & USL FC Edmonton Miller on Eddies’ loss to Cosmos: “If we’re going to defend like that, we’re going to get what we deserve” 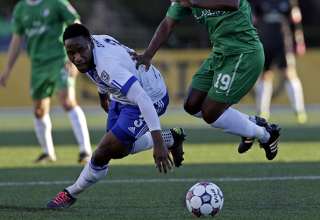 Two weeks ago, the Cosmos decided not to bring a lot of the club’s top players on a road trip to Edmonton — the B squad lost to the Eddies at Clarke Field.

On Sunday, the Eddies returned the favour, missing key regulars for their visit to New York. The Cosmos got first-half goals from Sebastian Guenzatti and Raul and went on to a 3-0 win.

“We were beaten by a better team, no excuses,” said Eddies coach Colin Miller. “The Cosmos are arguably the top team in the league, and they have done that to a lot of teams this year.”

Substitute Ruben Bover scored a late insurance goal after Eddies’ keeper Matt VanOekel and defender Albert Watson miscommunicated on who would handle a ball in the penalty area. Watson was forced to scatter the ball away, and it came right to Bover, who chipped the keeper.

The Eddies now trail the Tampa Bay Rowdies by one point for the fourth and final playoff spot in NASL. Both teams have three games left on their schedules. The Eddies are at Carolina Wednesday, then have a home-and-home with Jacksonville to end their season.

None of the players who missed Sunday’s game will be available for Wednesday’s match against the RailHawks. And Miller said he fears Roberts might not feature again this season after the centre back tweaked what’s been a chronic hamstring problem in training this past week.

Fort Lauderdale is tied with the Eddies, one point behind the Rowdies, but the Strikers have a game in hand over their rivals.

The Eddies actually did very well through the first 35 minutes. While the Eddies didn’t have a lot of possession, the midfield was crowded and compact and the Cosmos created little in terms of scoring chances. Going into the game, we knew that a draw would have put the Eddies into fourth spot, ahead of the Rowdies on goal difference.

But, in the ensuing 55 minutes. that Eddies’ goal difference took a beating.

First, the Eddies had two players on loose ball in midfield and, somehow, didn’t come up with possession. Gaston Cellerino streaked down the middle, slotted the ball down the wing to Sebastian Guenzatti, and the Cosmos forward tucked a shot in the corner.

It got worse just before halftime. Fullback Johann Smith had a chance to play a corner kick that was in his area; but the ball was allowed to bounce, it skipped to the far side of the box where, ahem, Raul (of all people) was left unmarked. He hammered a volley into the top corner.

“We’re not tight enough on a world-class player, how does that happen?” Miller said.

Even though Miller brought on Daryl Fordyce in the second half to join Tomi Ameobi in attack — a two-striker set we don’t often see from the Eddies — Cosmos keeper Jimmy Maurer had little to do other than retrieve wayward cross and through-ball attempts.

And it could have been worse than 3-0. In time added on, VanOekel made two sensational saves, denying Bover on the goal line and then leaping to parry away a Raul chipped effort.

The Eddies are now through this gauntlet of New York-Ottawa-New York on the schedule, and got three of a possible nine points. The question will be, even if the Eddies get to the playoffs, can they raise their game to give the Cosmos, Fury or Minnesota a real fight?

“I think we came into New York knowing that any point we could get here would be a bonus for us. Now, it’s all hands to the pump for Wednesday’s game. Carolina is very tough to beat at home.”