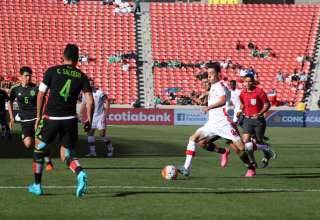 When any Canadian men’s team plays Mexico, the goal is to survive the first few minutes of the game, to try and get a foot into the match.

Well, before the six-minute mark of Saturday’s CONCACAF Olympic qualifying semi-final in Sandy, Utah, Canada found itself down 1-0 to the Mexicans. Erick “Cubo” Torres’s header gave the Mexicans the advantage. The Mexicans would go on to a 2-0 win, which means Canada will play the United States in the third-place game. The winner of that consolation match will face Colombia for a wild-card spot in the Olympics.

Canada has had defensive issues throughout the tournament; but, in the case of the Torres header, the positioning wasn’t bad. Canada had three defenders in the box, and only Torres was available for the cross. Jeremy Gagnon-Lapare had decent position on Torres. But Torres got into the air and simply overpowered the Canadian who was marking him.

(Gagnon-Lapare is midfielder asked to be a makeshift fullback for this tournament. We will simply once again note coach Benito Floro’s decision to declare a roster that was desperately short of natural fullbacks.)

Floro brought Jay Chapman, Hanson Boakai and Ben Fisk into the starting XI. And, just before the Torres goal, Canada had a great look in the Mexican penalty area. Chapman stole the ball and passed it across the box to a wide-open Boakai. But Boakai’s first touch was heavy, and the ball scooted away. Had Boakai controlled the ball, he had clear sight of goal.

Mexico had a lot of possession and, just before the 60-minute mark, Hirving Lozano, the winger who terrorized Canada at the CONCACAF U-20 Championships, hit a shot into the roof of the goal. The effort came after Canadian midfielder Samuel Piette headed his clearing effort across the penalty area rather than out of the penalty area. It was a dreadful defensive error.

Canada had a great chance to make it 2-1 in the 78th minute, after Mexican defender Erick Aguirre handled a cross from Jackson Farmer in the penalty area. Michael Petrasso stepped up to the penalty spot, but didn’t get his shot close enough to the post. As well, it was hip-high, perfect for a keeper to handle. Mexican goalkeeper Manuel Lajud got to the shot, and Canada’s chance to halve the lead evaporated.

Late in the game, a looping header from Canada’s Skylar Thomas went off the top of the bar.

Going into a game against a powerhouse like Mexico, you know Canada’s going to have precious few chances — so, to have any hope at all the conversion rate has got to be decent. Canada had three very good looks; Boakai misplayed the ball, Petrasso hit a poor penalty and Thomas was was close, but high. On the flipside, as Piette said before the game, you know Mexico is going to get its chances, but Canada simply couldn’t help the Mexicans with any gifts. The Mexican goals came because Gagnon-Lapare lost a one-on-one battle and Piette made an awful clearance attempt.

If you had a checklist of what Canada couldn’t afford to do in this game, all the boxes would have been ticked after 90 minutes.