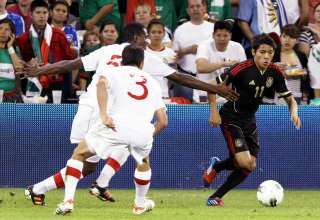 As the full-time whistle sounded, nearly every Canadian player slumped to the field in disappointment. They weren’t expected to win, but it didn’t diminish the stings they were feeling.

Canada’s Under-23 side fell to a 3-1 defeat against Mexico at Livestrong Sporting Park in Kansas City. With the loss, Canada’s dreams of qualifying for the 2012 London Olympics are dashed. The team lost at the same stage four years ago in qualifying for the 2008 Beijing Olympics.

“We knew coming in that this would be a mountain to climb. I’m very proud of the boys,” head coach Tony Fonseca said in his post-match press conference. “They fought with everything. They left everything in the field today. Unfortunately they faced a team that was better today.”

The game could have had a massively different complexion had Doneil Henry’s header in the sixth minute not been cleared off the line by Miguel Ponce, who scored Mexico’s insurance goal in the second half.

After that, Mexico was at its very best—passing the ball with ease and looked every bit the team that has had, comparatively, an eternity playing together compared to the Canadian team that was hastily pieced together just over a week before the tournament.

Playing in front of a mostly pro-Mexican crowd that was impressively loud, Mexico got its just rewards in the 20th minute when Marco Fabian split the Canadian defence and easily slotted a ball past Michal Misciewicz, who has been a revelation in the Canadian goal but was pretty much helpless on that play, even with his slight hesitation in coming off his line.

But this Canadian team preached heart and working for each other throughout the tournament and it was rewarded with just fewer than 15 minutes remaining in the half, when Marcus Haber got on the end of a Philippe Davies cross to head Canada level.

For seconds, hope was raised that the improbable was possible but within seconds of the two former Vancouver Whitecaps pairing up for Canada’s goal, the Mexicans got themselves back in front for good through Alan Pulido.

“Obviously when we score in a situation like that you think you’re back in the game and all of a sudden you go down again,” said Fonseca. “It makes an impact in the team but I thought we kept fighting and we kept battling for things but at that particular moment it was painful to watch.”

Canada survived the continuing Mexican onslaught and made it to halftime just trailing a goal but, for a team that openly spoke about togetherness and picking each other up, you sensed that second goal hurt them more than just on the scoreboard.

“I thought when we scored the goal we came back in the game but they scored right away,” said Davies with a shrug. “It’s tough—for them to score the second goal right away.”

As the players left the locker room on the way to the team bus after the game, they kept their heads up. Perhaps more than the disappointment they’re feeling, the players are more disappointed that they don’t get to play with this group again. Over the course of this tournament, the word “family” was used regularly to describe the makeup of the team.

“I think we played like men today,” said defender Andres Fresenga who also said it’s not going to be fun to leave this group behind but is sure they’ll be back. “That’s what I’m most proud of this group of men. Today we were men and anyone whoever though about Canada being soft—they could have watched today’s game.”

Ponce’s top-corner screamer put Mexico out of sight. And, Henry’s second yellow card in the 78th minute was the fatal blow for Canada’s dwindling chances.