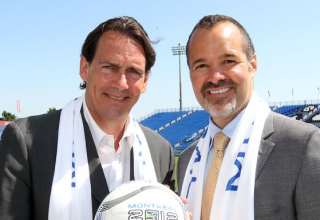 The days of intermittent, indistinct webstreamed of Montreal Impact games are drawing to a close. When the club join sMLS next year all the team’s games will be televised, available in high-definition as a result of the five-year agreement the team announced today with Quebecor Media and its subsidiaries — a deal that team president Joey Saputo described as “the most important in club history.”

A total of 24 games will be shown on the team’s official broadcaster as of 2012 on TVA Sports, Quebec’s new French-language all-sports network, as well as being available on and through Videotron, another Quebecor affiliate that provides cable, Internet and mobile telephone services.

“Combined with the existing MLS national broadcast the Montreal Impact will have all their games televised in HD. Fans will be able to follow the team all year long be it at home or on the road, regular season or playoffs as well as international matches,” said Saputo. “Videotron will allow our fans a more complete and enjoyable experience, both here at the stadium as well as at home through their various platforms – cable web and mobile.”

Joining Saputo for the announcement this morning were Pierre-Karl Peladeau, President and CEO of the Quebecor communications conglomerate, Pierre Dion, head man at TVA Sports and Robert Depatie, his counterpart at Videotron. Dion spoke of the Impact as prestige programming for the fledgling network, launched in May of this year, saying that the broadcaster was committed to bringing as many Quebec-based sports activities to as many households across the province as possible, citing the many locally produced athletic events it has broadcast so far, from MMA bouts to the recent Montreal Open golf tournament.

Depatie was enthusiastic about the new agreement as well declaring that his organization had two goals in mind, “Giving fans in the stands the best possible experience during impact games and helping the team reach its supporters across Quebec by virtual means. Just imagine the opportunities that our multi-platform presence will create on both counts.”

“In order to be strong you have to be strong in your market and that’s what Videotron gives us,” explained Saputo. “It makes us stronger in our market and it gives us the relevance we need in our market. If you take a look at the platforms they have, not only the telecommunications and television aspect of it but the written media aspect of it as well. They have what you call a star system where they can create the stars through the different platforms that they have. It’s going to give us the relevance we need in our market.”

While the TVA deal involves the French broadcasts, English language fans have not been left out in the cold.

“There’s still the deal that the league has with the Bell Group where a portion of our games will be on RDS and a portion on TSN with the balance on TVA sports,” continued Saputo. “It also opens the door, if you look at what TVA does with Rogers Sportsnet, obviously the relationship they have may allow us to do something else on the English side.”