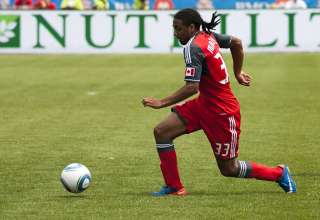 Perhaps all Toronto FC needed was to be back at BMO Field. A week after a disappointing loss in the season opener in Vancouver, a much-improved TFC side won its home opener by a 2-0 score over the Portland Timbers.

Striker Javier Martina led the way with his first two career MLS goals, but perhaps even more important than Toronto’s scoring was the lack of a goal from the other side. The Reds’ back line stood up against a persistent Timbers attack and kept the clean sheet, just a week after allowing four goals to the Whitecaps.

“Players were playing with more confidence, more composure on the ball, more decisive with their passes, better communication,” said defender Adrian Cann. “The performance that we had today was like night and day compared to Vancouver.”

Cann was back in his customary centre back position after playing left back in the opener. The move was ostensibly due to a training injury suffered by Nana Attakora (who did not play), but the solid performance of Cann and fellow centre back Ty Harden would seem to indicate that they’ll earn more time together.

“When I play there it’s second nature to me, I’ve been playing there my whole career,” Cann said. “I feel like I’m more in control of the back four, relegating and dictating with the rest of them. I have more of a presence in the middle as opposed to the left. I’m open to change but I’m more comfortable in the middle.”

The improved defense was on display in the first half, as Portland didn’t manage a shot until the 25th minute. The remaining 20 minutes until the break, however, saw the Timbers largely control the action, though they hardly dominated. The Timbers had a number of setpiece opportunities (including three corners) but Portland didn’t make anything of them.

TFC’s attack, however, came to life early. In the 14th minute, Dwayne De Rosario had the ball in the Portland box but was held up by defender Steve Purdy. With another defender closing, De Rosario snuck a canny pass to a streaking Martina, who fired the ball past Portland goalkeeper Adin Brown. It was the first MLS goal for the Dutch striker, who was signed by the Reds earlier this month.

Martina’s goal, however, was TFC’s last shot for the next 35 minutes. Both teams were having trouble adjusting to the conditions at BMO Field. A mid-week snowstorm had taken its toll on the pitch, and the game-time temperature of -4 C didn’t help matters. Reds ‘keeper Stefan Frei said the weather impacted his club’s strategy heading into the match.

“[We worked on] passing drills and trying to build out of the back, and it made it more difficult today with the field,” Frei said. “It made it very risky at times to try to take it out of the back. More than we probably would’ve liked to, we ended up trying long balls. But we have to adjust the situation to the surroundings and we did a decent job of that and fortunately got a win.”

Portland seemed to adjust quicker than the Reds did at the start of the second half, as the Timbers enjoyed several minutes of possession in Toronto’s end. The Timbers just couldn’t pull the trigger on a clear scoring chance, however, thanks in part to Harden and Cann’s work in shutting down striker Kenny Cooper. Though the Portland forward (who has six goals in four career games against TFC) drew a lot of attention and a number of fouls, Cooper managed just one shot in the game.

“It was a good breakdown from [the coaching staff] in regards to Kenny Cooper’s tendencies,” Cann said. “He likes to take long-range shots so anytime he’ll try to drift in the midfield, give him a lot of pressure from the back but don’t commit. Keep his back toward the net, that’s what we tried to do.”

With the Timbers unable to score, Toronto put the game away in the 70th minute. After collecting a corner, Frei sent a long pass downfield that found Martina on the right side. The forward looked to be almost off-balance in trying to corral Frei’s massive kick, but Martina collected himself and fired a tremendous right-footed shot past a diving Jake Gleeson and into the left side of the Portland net.

Martina said that with little time to react, he went with instinct and just fired rather than continue forward.

“I saw the defender coming and it was a long sprint, so the only thing I’m thinking is ‘just shoot,’ ” Martina said. “If I’m trying to hold the ball I’m tired from the sprint, so I decided to shoot it and see what happens, and it went in.

“I feel very happy. We did it as a team, everybody worked very hard. This week I made two goals but maybe next week, another one makes two goals.”

The victory was the first for Aron Winter as Toronto FC’s head coach, but Winter noted he wasn’t pleased with his team’s missed opportunities or how his players moved without the ball.

“It has to be much better in the future but the most important thing is this moment to start at home,” Winter said. “It was a good victory. If you look at the total 90 minutes we deserved to win.”

There were a few empty seats to be seen amongst the announced sell-out crowd of 20,086, but overall, the BMO Field crowd showed its usual passion in supporting the Reds. Given the fan backlash that emerged at the end of last season, Saturday’s result is a good step for Toronto FC in keeping its fans’ trust.