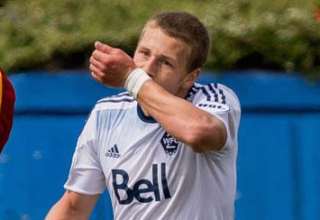 The CIS may present the most difficult route for a Canadian player to get to the highest tiers of North American pro soccer.

It’s not that CIS universities are that much more than NCAA schools; but, with the rise of pro academies and the glitz of the NCAA, the CIS, well, it isn’t scouted all that much. Canadian University soccer is too often seen as a place where players squeeze a few more years of first-team play out of themselves.

And that’s why, whenever a CIS product signs a major pro contract, it’s reason for Canadians to applaud. On Tuesday, the Vancouver Whitecaps announced that University of Saskatchewan product Brett Levis has been promoted from its USL side to a full MLS contract. The deal runs through 2017 with options for ‘18 and ‘19.

Levis is the Huskies’ all-time leader in assists and ranks second all-time in goals. He had eight goals in 40 games with WFC2.

“Brett is a great example of a player who took his opportunity,” said Whitecaps head coach Carl Robinson in a release issued by the club. “With Whitecaps FC 2, he showed skill and versatility, and the willingness to learn and adapt to a new position. When given the chance to train and to play for the first team, he’s taken full advantage of it.”

Levis is not the first CIS product to play in MLS. Right now, University of Montreal product Wandrille Lefevre is playing for the Montreal Impact. And he’s not the sole Husky to play pro soccer. Paul Craig played with FC Edmonton in NASL.

This year, a Calgary Foothills team — packed with CIS players — got to the PDL final in a league stacked with teams filled with top-flight NCAA prospects. The CIS guys held their own, and lost in the final on a very controversial penalty call late in the championship game. When players like Lefevre and Levis — or the many CIS products who have played in NASL — get the call, it gives hope to those like the University of Calgary’s Dominic Russo, who was nominated for the PDL’s MVP award for his play with Foothills in 2016.

In the past we’ve seen CIS products like Paul Hamilton, John Smits, Craig, Gagan Dosanjh and Elvir Gigolaj play with FC Edmonton, with varying degrees of success. We must remember that Hamilton, though, was an NASL First XI selection early in his pro career.

But this year, we might see the best FC Edmonton CIS story of them all, as Shamit Shome plays for the Eddies, while going to the University of Alberta at the same time. Last season, he played for the Golden Bears.

The USL has many CIS grads featuring on its teams’ rosters.

So, maybe it’s time we all paid a little more attention to Canadian university soccer.