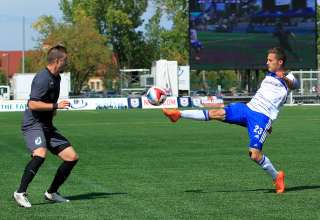 As we hit the halfway point of the NASL’s fall season, we’ve seen three teams — FC Edmonton, the Indy Eleven and New York Cosmos — break into a lead pack in the overall standings.

So, unless we see a major capitulation by either the Eddies or the Cosmos — remember that Indy is guaranteed a spot in the four-team post-season as the Eleven is the spring-season title holder — we’re going to watch the rest of the teams battle for the fourth and final playoff spot.

Let’s look at what the teams need to do:

FC Edmonton
First place, fall standings; First place, overall standings
The goal for the Eddies is to extend its lead atop the standings as much as possible through September. In October, the Eddies finish with three of their last four games on the road — so the team needs to take advantage of its game at Clarke Field, where it hasn’t lost since April. The goal for this club? To make sure November playoff games are played in sub-zero conditions at Clarke Field.
Key game: Sept. 17 at New York Cosmos
This could be the decider when it comes to which of these teams gets to host the Championship semifinal. Eddies have already beaten the Cosmos twice this season, but both of those were in Edmonton.

New York Cosmos
Second place, fall standings; Second place, overall standings
The Cosmos trail the Eddies by two points in the fall standings, one in the overall chart. But, if the Cosmos don’t win the fall, the overall standings may be moot — it will likely be the No. 3 seed. The big issue? The Eddies have a game in hand. The Cosmos will likely need to improve on a poor road record in order to get to the summit.
Key games: Aug 31 at home to Indy, Sept. 24 away to Indy
The Cosmos and Indy can’t afford to beat up on each other while the Eddies have the chance to pull away. Best scenario for Edmonton is that the Cosmos and Indy draw both games. Eddies have only one game each left against Indy and the Cosmos

Indy Eleven
Spring season champs; Third place, overall standings
Indy’s goal is to secure the No. 1 seed. This incredibly quick team, that gets late goals because they’ve run the opposition into the ground, would be slowed down immensely by a hypothetical Soccer Bowl in the Edmonton cold. But, the Eddies are three points up in the overall standings, with a game in hand.
Key games: See New York Cosmos above… Indy and Cosmos could end up pummelling each other as Eddies pull away.

Minnesota United
Fourth place, fall standings; Fourth place, overall standings
Eight points out in the overall standings, seven points out in the fall standings. The realistic goal for Minnesota is to hang on the No. 4 seed, then go on a magical playoff run like this club did back in 2011. But, will MLS be a distraction. We saw how the anticipation of moving to MLS wrecked a very talented Montreal Impact in 2011 — the players stopped playing for the team, and treated every game like a tryout. Minnesota’s talent tells us this club will hang on.
Key game: Oct. 15 at home to FC Edmonton
This game won’t just be about holding onto fourth, it’ll be about sending a message heading towards the playoffs. If Minnesota wants to convince us it’s a contender, it will need this one.

Miami FC
Fifth place, fall standings; Ninth place, overall standings
Thanks to a miserable spring season, Miami FC has one chance to make the playoffs — win the fall season. Right now, Miami FC is eight points behind the Eddies, but with a game in hand — and two games in hand over most of the rest of the league. It will burn one of those games on Wednesday in Ottawa. The team has spent seven digits to improve the roster, and a 4-0 win in Minnesota gave us a glimpse of what this team can do when it’s on. But is it a bridge too far?
Key game: September 11 at FC Edmonton
If Miami FC is to mount a challenge for the fall season, it needs to sweep FCE in the fall season. And that means going to the House of Horrors that is Clarke Field and winning a game there.

Rayo OKC
Sixth place, fall standings; Seventh place, overall standings
The task is clear. Rayo OKC need to make up a six-point gap to Minnesota in fourth, with 12 games left to go for each team. But, will the soap opera in the front office be a distraction? Will the threats of cost-cutting measures affect morale?
Key game: Sept. 3 at Minnesota United
Rayo has just one game left against the Loons, the team they need to chase down. If they don’t steal three points in Minnesota, we can begin writing the eulogy for the season.

Carolina RailHawks
Seventh place, fall standings; Sixth place, overall standings
The RailHawks trail Minnesota by five points for that fourth overall spot. But the RailHawks have a game in hand. And, Colin Clarke’s men don’t have to go back to Clarke Field, a place where they have never won a game.
Key game: Oct. 22 at home to Minnesota United
Carolina has to hang in the race, and be close enough to make this game really matter. The RailHawks tend to be a different kind of team on the putting green that is WakeMed Park, so this could be a big one near the end of the regular season.

Fort Lauderdale Strikers
Eighth place, fall standings; Fifth place, overall standings
The Strikers, like Carolina, have to target Minnesota in fourth spot. The Strikers are five points back, and look to be over that early fall-season swoon that coincided with reports about players’ paycheques coming in late. Is the addition of Amauri going to be a difference maker? He looked great with two goals against Ottawa.
Key game: Aug. 31 at home to Minnesota United
This upcoming game will either put Fort Lauderdale right back in the playoff race or all but bury the Strikers.

Jacksonville Armada
Ninth place, fall standings; 11th place, overall standings
The Armada aren’t going to be in the playoffs. Fourteen points back of Minnesota is a bridge too far.
Key game: Sept. 28 at home to FC Edmonton
This is a chance for the Armada to play spoiler. The Armada ruined the Eddies season last year, taking seven of nine points from FCE.

Ottawa Fury
10th place, fall standings; 10th place, overall standings
A loss to Jacksonville at home and then a loss on the road to the Strikers all but ended this team’s playoff hopes.
Key game: This Wednesday at home to Miami FC
If Miami is to make a surge for the fall season, it needs to win its games in hand. It will burn one Wednesday in Ottawa. The Fury can end the Miami FC challenge before it really has a chance to get going.

Tampa Bay Rowdies
11th place, fall standings; eighth place, overall standings
Since owner Bill Edwards went on a tirade about officiating, and the team issued a video of calls it felt went against it during the season, the Rowdies have gone into a death spiral. The Rowdies have surrendered a series of game-changing penalties. Do. Not. Ever. Embarrass. The. Refs. Still, the Rowdies are seven points behind Minnesota, so not quite dead…
Key game: This Saturday at home to Rayo OKC
After failing to make up ground with losses to the Cosmos, Minnesota and the Eddies, the Rowdies must right the ship this weekend. Another loss at home and it might be all she wrote.

Puerto Rico FC
12th place, fall standings; 12th place, overall standings
They’re not going to win the fall season, but this team has been very competitive. It will get points at home. That brutal road trip will hurt some of the contenders down the stretch.
Key game: Oct. 8 at home to Minnesota United
Indy, the Eddies and the Cosmos have all burned their trips to PR; but the Loons still have to go there, and surviving the plane ride, the heat and the humidity is key for a team looking to hang on to fourth.