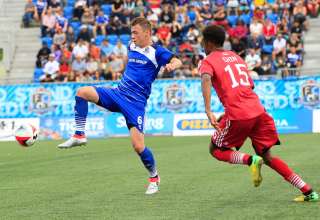 Conclusion after this weekend’s games: A team from Ontario that wears red jerseys should never, ever want its opponents to have players sent off.

On Saturday, in MLS action, Toronto FC surrendered the winning goal to San Jose, despite the fact that the Quakes were down to nine men. And, on Sunday in NASL action, 10-man FC Edmonton got a late goal from Nik Ledgerwood to beat the Ottawa Fury, 1-0.

The Eddies are now just three points behind the New York Cosmos — with a game in hand — for first place in the NASL overall standings. The Fury has yet to get a point in the fall season.

The Fury fluffed numerous chances in front of goal before and after FCE centre back Pape Diakite got his second yellow in the 60th minute. Included in those misses were a couple of chances from Eddie Edward, who was returning to Edmonton for the first time since being signed by Ottawa during the break between the spring and fall seasons.

Edward, playing as a true right winger rather than as a right back, had a chance on the break in the first half and put the ball just over the goal, then had a headed effort stopped by Eddies keeper Matt VanOekel in the first half.

The Fury also had chances that fell victim to very poor touches from strikers in key areas. Dennis Chin had a chance in the area, but a poor first touch allowed Eddies’ fullback Adam Eckersley the time to get back into the box and scramble the ball away. And, in the second half, Giuseppe Gentile had a chance to go into the box one-on-one with VanOekel but lost the ball in his feet.

“We definitely hd the better chances, we had enough chances to win the game,” said Fury coach Paul Dalglish. “If you don’t score goals in football, you can’t win the game. It doesn’t matter how much effort you put in. It doesn’t matter how many tackles you win or how many headers you win or how many passes you complete… And, far too many times this season, we’ve missed clear-cut opportunities to score goals. We’ve got to fix it. It can’t continue.”

Edward and centre back Mallan Roberts, on loan from FCE to Ottawa, both started for the Fury. As well, newly acquired winger Maxim Tissot and forward Thomas Stewart got their first starts.

“It’s kinda hard to describe what I was going through,” said Edward. “Obviously, really happy to see everyone. But, bitter that we lost. Obviously, we wanted the three points.

“I’m not sure what it is right now. It’s like we’re allergic to scoring goals. We have to continue trying to do the right things. We are finding some success, we just have to put the ball in the back of the net.”

It looked good for Ottawa when Diakite unleashed two rash challenges early in the second half. First, he came in with a diving two-footed challenge on Ottawa’s Carl Haworth, that had the Fury baying for a straight red. Diakite was very fortunate to get only a yellow.

“I actually thought he was lucky to stay on for the first challenge,” admitted FCE coach Colin Miller. “I thought it was a straight red… I can’t defend the player, it was just ludicrous.”

But, knowing he was walking the tightrope, Diakite returned with another rash challenge that gave referee David Barrie no choice but to send him off. Chin had the ball on the line and was headed out of bounds. Diakite came in with a challenge from behind, anyway, even though Chin was essentially heading out of play.

After Diakite was sent off, the Fury went with just three at the back. And Miller decided to see if he could take advantage of it, putting in speedsters Johan Smith and Sainey Nyassi.

The goal came with less than 10 minute to. Nyassi got down the right wing, and for some reason Fury fullback Lance Rozeboom decided to back off and not put a challenge in. Given the time and space, Nyassi squared the ball for Ledgerwood, who put the ball in the corner.

“The substitutions that we made had an influence on the game because it wasn’t just a negative substitution,” said Miller. “With the pace going forward, I think we caused them problems and Leg scoring the goal when he did just gave us a lift. A fantastic team effort here, today. “

Ledgerwood admitted that it’s odd to play Ottawa. When he played in Europe, seeing another Canadian was a rarity. When Edmonton and Ottawa play, there are plenty of former teammates, national teammates and friends on both sides of the ball.

“There’s definitely a lot of friendships there, a lot of guys that we know, that have played here…. It’s kind of a weird situation, we don’t get it that often. There’s six or seven guys on that team I can call friends. But at the same token, at the end of the day, we want to go out and win, I am sure they want to do the same, so we kind of put our friendships aside for the 90-odd minutes and go at it with each other.”