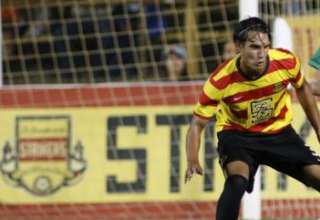 Karsten Smith, with Fort Lauderdale in the 2015 season.

To say the last couple of days have been a whirlwind for centre back Karsten Smith would be an understatement.

He arrived in Edmonton Saturday. Smith passed his medical Sunday morning, and he was announced as a new signing by the Eddies shortly after.

There was a scare that captain Albert Watson might not be able to play, but he passed a fitness test and went the full 90 Sunday, despite needing stitches in his chin after a challenge with Ottawa’s Thomas Stewart.

But Smith had to come in and play the final 30 minutes after the Eddies other starting back, Pape Diakite, was sent off for two rash challenges.

“I was told late afternoon (yesterday) that I’d be on the bench today,” said Smith. “I was mentally preparing myself to play but you never think you’re going to play when you first show up, I haven’t even trained with the team yet.”

And Smith helped the Eddies to a 1-0 win despite being down to 10 men. He didn’t even know all of his teammates’ names when he was put into the game. He just tried to keep his game as simple as possible.

Smith is a close friend of Eddies striker Tomi Ameobi; the two were teammates in Finland. Smith was with the Fort Lauderdale Strikers last season, but moved to the USL’s Pittsburgh Riverhounds to start the 2016 campaign. He wasn’t happy there, though.

“I was with a team in Pittsburgh who weren’t doing so well. I was in and out of the team, I wasn’t really agreeing with everything that was going on there. So, when the opportunity arose, I cam over here. I’m excited.”

In fact, the move is so fresh that the Riverhounds still have Smith listed on the team’s roster. But Smith said his first impressions of Edmonton have been positive.

“I could tell right away as soon as I got on the field that this is a team that has great chemistry. Everyone was communicating and helping me out. I’ve been on teams where that’s been an issue. So I recognized already that this is a special team, so I’m grateful. I’m glad that I’m here and I am looking forward to the rest of the season.”

Miller is happy to get a left-sided centre back ; and Smith likely will get another chance next week on the road to the Indy Eleven, as Diakite will need to serve a one-game suspension.

“That door closes and Karsten Smith has taken his opportunity with both feet, can I say that,” said Miller.

The coach said FC Edmonton will have another new player arrive early next week.