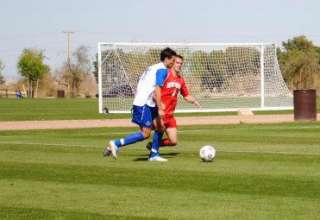 Matt Lam in action against the University of New Mexico

Lam, who returned to FC Edmonton in January after his one-season loan deal with Japanese second-division side JEF United expired, converted a penalty and later set up Paul Craig’s winning goal as the Eddies got their first win of the preseason, a 3-1 decision Tuesday over the University of New Mexico in Casa Grande, Ariz.

Ilja Van Leerdam scored in the second half for Edmonton, which had scored just one goal over its first two preseason matches — both of them draws.

Lam said that it’s taken the players some time to readjust to regulation-size grass fields after the club spent the winter playing on a small artificial surface at the Victoria Soccer Centre in the north end of Edmonton.

“We’ve started to get adjusted to the bigger fields,” said Lam. “We are starting to get the feel of it.”

With Kyle Porter and Shaun Saiko off to join the Canadian national U-23 team for its pre-Olympic qualifying camp, more space is open on the right side of the attack. Through the first couple of preseason matches, Lam was used out on the left side, but was on the right side on Tuesday, which is his natural position.

But, the player who stood out the most for FC Edmonton back in 2010 — when the team played a series of friendlies — said he is ready to play wherever coach Harry Sinkgraven wants to put him in the formation.

And, Lam said his shoulder, which caused him much grief during the Japanese league season, is holding up fine. Lam was originally scheduled to have surgery to correct the shoulder, which had been dislocated. But, before the team left for Arizona, Lam decided against the surgery, and chose instead to wear a brace on it for he season.