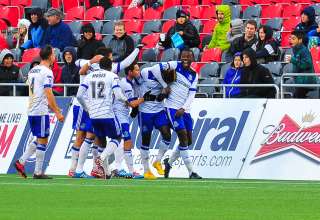 Lance Laing is mobbed by his FCE teammates after scoring directly off a corner kick.

In the middle of the week, Lance Laing signed a contract extension that will keep him in Eddies blue and white into the 2015 season. And, on Saturday afternoon in the nation’s capital, he once again showed off why he’s become such a valuable part of the team.

In the first 21 minutes of a must-win match against the Ottawa Fury, Laing set up Chad Burt’s opening goal and then scored directly off a corner kick. An assist and a goal, and the Eddies defended the fort for the remainder of the game. The final — 2-0 to FC Edmonton, and it puts the Eddies just one point back of fourth spot in the NASL overall standings.

Carolina, now one point behind the Eddies, faces the Strikers, who are a point ahead of the Eddies in the race for the final playoff spot, later Saturday. The best scenario for FCE is that the Strikers and RailHawks play to a draw. Because of a massive goal-difference advantage, the Eddies will almost certainly take any tiebreakers with Fort Lauderdale or Carolina. If the two rivals draw, the Eddies will be in control of their playoff destiny; that’s because the Eddies face Fort Lauderdale in Florida next week and then host Atlanta on what will likely be a cold November afternoon at Clarke Stadium.

But, for now, the Eddies can be comfortable in the knowledge that they have done their job by putting all of the pressure on their rivals for the playoff spot.

“I am so very proud of the guys,” Miller said after the game. (It was hard to hear him over the phone because of the FCE players who were singing in the dressing room.) “I actually think we could have scored two or three more. We started off the game with a bit of a wobble but then we started to play. I don’t think we allowed them a shot until the 46th minute.

“Now that we’ve played early, hopefully we’ll be the cat amongst the pigeons and be able to put the pressure on the other teams that are playing later.”

And, like last weekend’s win over Carolina, the Eddies jumped all over the opposition early. Eight minutes in, Laing chased down a ball on the left wing, and laid a low cross across the box for Burt to direct into the goal. The Eddies had their dream start.

Just after the 20-minute mark, the Eddies got their second. Taking a corner from the right side, Laing swung it in with his left foot. The ball took a right turn in the strong wind, and went directly into the goal — a rare Olimpico for Laing. The goal was his seventh on the season, giving him the team lead.

While it’s special to score directly off of a corner, there was no doubt Laing had some help by some abysmal near-post defending by the Fury. And Fury goalkeeper Romuald Peiser had gone for a wander off his line, and was nowhere near the ball when it floated into the goal — the keeper has to wear the goat horns.

But, in truth, for much of the first half, the Fury didn’t offer much opposition to Edmonton going forward. And the home team’s effort infuriated the Fury’s coach, Marc Dos Santos.

“I think we were sleeping for the first 20 minutes,” he said during the halftime on-air interview “It was a disgrace for our fans. They deserve better.”

The Fury eventually moved to a three-man back line, and had a lot of the ball in the second half. But, despite a lot of the possession, they struggled to break down a very organized Eddies’ side. In the 65th, FCE keeper John Smits had to come off his line to block a shot from the Fury’s Omar Jarun, but it was as close as the Fury would come.

Centre back Albert Watson was a massive figure for the Eddies, and he was dazed and his nose bloodied in the 74th minute when Vini Dantas attempted an overhead kick and instead got all of the FCE captain’s face. But Watson refused to come off, and was a rock for the Eddies.

It’s the kind of grit the team needs if it is to get to the post-season. And Miller revealed after the game that both Watson and Ritchie Jones had issues that made them question marks to play in Ottawa.

“Albert pulled himself out of training on Thursday because of his back, we had to bring young Marko Aleksic on the trip as a defender in case Albert was not able to go. And Ritchie Jones was sick a couple of times this morning, and he goes out and plays so well box-to-box, he could have had the third goal for us.”

(UPDATE: Former Rangers star Nacho Novo scored a late equalizer as the RailHawks fought back to get a 1-1 draw with Fort Lauderdale. With that result, the Eddies now control their playoff destiny. Two wins in their two remaining games, and no one can catch them for a post-season spot.)