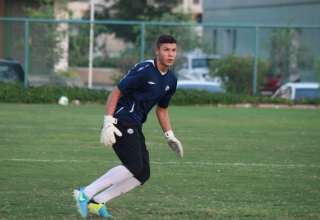 For the last several weeks, teenage goalkeeper Christian Kaiswatum had to keep a secret.

He knew that he was going to get promoted from the academy to the senior squad, but he just wasn’t quite sure when it would happen. And, he was surprised when the Eddies added him as a professional keeper right before the Oct. 6 NASL roster freeze. But, the deal wasn’t announced publicly, so Kaiswatum had to remain quiet.

Until Thursday, that is. The Eddies publicized the Kaiswatum deal; that the 1997-born keeper joins John Smits, Lance Parker and Tyson Farago in the rotation.

“I was a little surprised (about the deal),” said Kaiswatum. “They told me a couple of weeks in advance but I wasn’t expecting (to sign) so soon. I was expecting it later on.”

“Any time you see a young player with as much potential as he has, been involved in the national team program as well, there has to be something there,” said FCE coach Colin Miller. “Through Darren Woloshen, our goalkeeper coach, and what we’ve seen, that he’s able to jump up to this level of training. We hope, in a couple of years time, that he’ll be a goalkeeper that can be ready to play in the NASL. It’s another Canadian guy, another real success story from our academy, he’s worked very hard, his attitude is excellent. We have high hopes for him. We don’t sign him for the sake of signing him. We sign him with the view that we will give him an opportunity, and it’s now up to Christian to take this opportunity.”

Kaiswatum is the sixth academy prospect to be promoted to the Eddies’ current senior ranks . He was part of the Canadian side that went to the U-17 World Cup in the United Arab Emirates, a team that also featured FCE teammate Hanson Boakai in the midfield.

“Playing for Canada is always an honour,” said Kaiswatum. “Going out to every camp is a great experience, great exposure for me, it’s been great for my development.”

But he’s already noticed how much more intense the training sessions are with the senior squad.

“To get to the professional level, a lot of it is about consistency. That’s what I am trying to work on this year, to be more consistent every day. To come to training, and give out the same performance, day in and day out.”