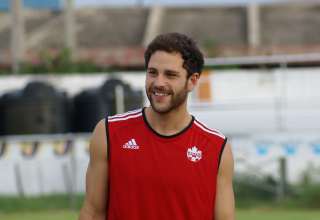 Kevin Harmse hopes that a successful NASL season with the expansion San Antonio Scorpions will show that he’s putting his career back on track.

The Canadian midfielder was announced as one of the first two signings made by the expansion team last week.

“It means a lot that that Tim (coach Tim Hankinson) and Hitch (general manager Michael Hitchcock) believe in me, that they wanted me as the club’s first player,” said Harmse, who joins former Whitecaps’ teammate Greg Janicki in San Antonio. “Everyone knows what Hitch has done in MLS. Tim has been in an excellent coach in Major League Soccer. And the club is a non-profit organization, which is something that’s unheard of in professional sports. That’s something I am very excited about.”

For Harmse, this season offers a chance to show the world that he’s healthy and can bring his hard-nosed, tough tackling style for a full season of matches. Harmse will likely be San Antonio’s holding midfielder, winning balls in front of the back line.

Harmse endured injury-riddled 2009 and 2010 campaigns. After leaving Toronto FC, he didn’t play for Chivas USA or Houston, even though he spent time with both clubs. In 2011, he signed with the Whitecaps — a team for whom he’d played in Division-2 — but was released in June, getting just 126 minutes of playing time.

“For me, this is a situation where I can go in, put my head down and do some hard work. I want to put together a full season of games. I had a couple of years where I had injury problems, but I have been completely healthy for a while. But I’ve got take a first step to getting myself back where I want to be. I have to put together a full season of games, and then maybe I can back to where I want be, whether that’s in MLS, something else or getting back into the national program.”

And Harmse said he knew quite early into his deal with Vancouver that we wasn’t going to be a Whitecap for very long. Coach Teitur Thordarson was sacked soon before his three-month trial was done, and Tom Soehn came down from the front office to take over as interim coach.

“When I went there, I signed a three-month contract, and we knew that we’d see how it would go, and then it could lead to another one- or two-year contract. The changes in the organization came just before my three-month contract was up. But I knew where I stood long before that. It was obvious things were not going to work out. Bobby (Whitecaps’ president Bob Lenarduzzi) went to bat big-time for me to get the three-month deal. It is what it is. In professional sport, no matter where you go, coaches have their players. It happens every day.

“It’s (San Antonio) not the same as Vancouver. Vancouver had been playing forever, the team was transitioning into MLS, but it wasn’t a new team. This is a team that has yet to kick a ball, so it’s a great opportunity.”

San Antonio is a welcoming spot for Harmse. It’s the seventh-largest city in the U.S. (it’s actually bigger than Dallas). The money raised by the Scorpions goes to support Morgan’s Wonderland, an accessible theme park designed with the requirements of special-needs children in mind.

“My wife grew up in San Antonio, but that isn’t the deciding factor on why I came here,” said Harmse. “My family is supportive and will come with me wherever I go. The reason I came here was because this is a great opportunity… I am going to be a leader on this team. I want to be the captain, even though that is Tim’s decision.”